Walking the dog can cause tennis elbow

Pain in the elbow that radiates into the arm - most of the time overloading causes a tennis elbow. The good news: There are now numerous good therapies.

The world number one Novak Djokovic (31) repeatedly plagued himself with problems on his right elbow. In Melbourne, Australia, he was eliminated in the round of 16 against South Korean Chung Hyeon at the beginning of 2018. The situation at the Wimbledon quarter-finals 2017 was even worse: The pain in the elbow was so severe that Novak Djokovic gave up due to an injury: "It's not the shoulder, it's the elbow that has been on my mind for a year and a half," said Djokovic after the match : “I tried everything, but unfortunately it was the worst today. I have to accept that. ”The Serbian tennis player has now had an elbow operation and is one of the best players in the world again.

Pain in the elbow is not uncommon for tennis players. On the contrary: the most common elbow disease was even named after this sport. The term "tennis elbow" goes back to the English doctor Henry Morris, who introduced it in 1883 ("lawn tennis arm").

In fact, around 50 percent of tennis players develop symptoms of what is known as epicondylitis, as the tennis elbow or tennis elbow is medically called, in the course of their athletic lives. The disease occurs more frequently from the age of 45. It affects women and men equally.

Typical symptoms are pain in the elbow, which can radiate to the forearm and upper arm. In addition, there is pressure pain on the elbow. Often the elbow area is swollen. The strength of the hand and finger muscles also decreases. Light objects like a coffee cup can no longer be lifted without difficulty, and even small gestures like shaking hands are painful. Later on, the pain can occur without putting any strain on the arm. Sometimes there are other symptoms such as a tingling sensation in the hand.

What is a tennis elbow?

If you take it medically, the pain in tennis elbow is localized around a small protrusion of bone, the so-called epicondyle, on the outside of the elbow. This is where the forearm and thumb-side hand and finger extensor muscles start via tendons. They are responsible for moving fingers and wrists. Dr. Ansgar Ilg, orthopedist at the OrthoCentrum in Hamburg, who plays tennis himself enthusiastically: “Tennis elbow is an overuse injury as a result of repetitive microtraumas. These microfine cracks arise when the tense tendons constantly rub the elbow bones during hours of monotonous movements. "

Normally, repair mechanisms are set in motion immediately when a tendon is overloaded and has suffered damage to its collagen structure. The blood flow increases to initiate healing. But the tendon metabolism with a cell division time of eight weeks is very slow. "If the overload persists, the healing process is disturbed," explains Ilg. “As a result, damage cannot be adequately repaired. Inflammation and incorrect healing with scarring of the tendon develop. One also speaks of a degeneration of the tendon. "

Such overloads are not only caused by excessive training. Rather, the wrong technology is often the cause. Perhaps this also explains why more amateurs are affected than professionals in tennis: professional tennis players usually always have a trainer nearby who can correct them immediately if necessary. Recreational athletes, on the other hand, often simply meet up with friends to play tennis. It is more likely that the wrong technology can creep in. Ilg says: “A major factor that can trigger a tennis elbow is playing over the backhand. Especially with the backhand, the extensor muscles are stressed and strained. A tennis racket that is too tight and too heavy can also be responsible for the tennis elbow. "

Age also plays a role, because the elasticity of the tendon tissue decreases with age. People who have to perform uniform movements with bent elbows at work have an increased risk of developing tennis elbow. This includes craftsmen, but also office workers who work on computers all day. Sometimes the tennis elbow is therefore also called "mouse arm".

Tennis elbow - This is the best way to prevent it

- Always warm up and stretch well before playing tennis
- Video controls for studying technology: The wrist should not be bent when performing the backhand strike and the striking movements should be made with a stretched wrist
- The tennis racket should be optimally strung
- The handle of the racket should be perfectly matched to the size of the tennis player's hand
- It is better to use light balls
- Increase training intensity and duration slowly
- Take regular breaks

Elimination of the triggering causes

Because other diseases can also cause symptoms typical of tennis elbow, including nerve irritation, muscle changes or osteoarthritis in the elbow, an accurate diagnosis by an orthopedic surgeon is important. The basis is a physical exam that everyone should undergo. In a tennis elbow, the protruding bone on the outside of the elbow reacts to pressure. The muscles attached to the elbow can also hurt when the fingers are stretched. "If the patient presses the wrist upwards against resistance, the pain is most pronounced," explains Ilg. “There are also certain nerve tests to examine the cervical spine and muscles. If necessary, apparatus-based examinations such as x-rays, ultrasound and magnetic resonance tomography are indicated. "

There are numerous good treatments available. "Especially in the early stages, the disease responds very well to conservative therapies," emphasizes the Hamburg orthopedic surgeon. The focus is on eliminating the triggering causes, if these are known: improve the technique when playing tennis, adjust the quality of the racket, stringing and grip strength optimally to the respective player.

In the acute stage, cooling and immobilization for several days are recommended. “The cold reduces the swelling and the pain is reduced,” says Ilg. Temporary immobilization in an orthosis can be useful in the case of severe pain when moving. In addition, the patient usually receives pain medication that must be taken regularly.

If the acute pain has subsided, physiotherapy should be started. Muscles and tendons need to be stretched, strengthened and massaged. Motto: If the muscles around the elbow are strong, they relieve the tendons. Ilg: “In physiotherapy, it is important that manual therapy is combined with (eccentric) stretching and strengthening. Mobilization of the shoulder and elbow joints as well as the wrists should also be included. "

In the case of very severe elbow pain, a middle ground is recommended

The infiltration of various preparations is an important part of conservative therapy for tennis elbow. The injection of cortisone at the attachment point of the extensor tendon has long been considered the "gold standard". In fact, cortisone removes pain quickly and effectively. However, studies show that spontaneous tendon ruptures occasionally occurred when the load was resumed. Apparently, cortisone damages the tendon tissue in the long term. Another theory assumes that the high relapse rate after cortisone injections was due to the fact that the patients did not take it easy long enough due to the sudden freedom from pain. Ansgar Ilg: "If the patient suffers from very severe pain in the elbow, a middle course is usually recommended: The patient receives a one-time cortisone infiltration, but repeated injections should be avoided."

Various studies show that botulinum toxin can also reduce pain. The neurotoxin paralyzes muscles and tendons for two to three months so that they can recover. Due to possible complications such as nerve irritation with disorders of sensitivity and motor skills, this therapy is hardly ever carried out in sports medicine.

Injections with the body's own growth factors seem to be more promising. During treatment with “Platelet Rich Plasma” (PRP) or “Autologous Conditioned Plasma” (ACP), anti-inflammatory growth factors and pain-relieving messenger substances are prepared and isolated from the patient's blood in a centrifuge. They can then be injected directly onto the degeneratively changed tendon tissue in concentrated form. "Studies show that with the help of these processed, concentrated growth factors, the damaged tissue heals and regenerates faster and better," says Ilg.

Studies show that shock wave therapy is also effective and safe, with at least three therapy sessions at least one week apart for optimal results. In shock wave therapy, high-energy sound waves are directed to the painful tendon attachment. The waves can reduce pain and stimulate healing.

Another therapy option is the so-called epicondylitis brace. This exerts pressure on the muscles and leads to a slightly different tensile stress on the painful tendon insertion. Epicondylitis braces should be worn for several hours a day, especially during exercise. A wrist cuff would be an alternative. This is only worn at night and is intended to prevent excessive flexion in the wrist while sleeping.

Only if all therapy attempts have not eliminated the pain and discomfort even after several months, the doctor will recommend an operation. There are different surgical procedures: In the open surgery according to Nirschl, certain extensor tendons of the wrist and fingers are detached from the bone at the elbow via an approximately three centimeter long incision, and diseased tissue is removed. The blood circulation and the immigration of stem cells are stimulated through the smallest of bone holes. Then the tendons are sutured again. This eases the tension and reduces the pain. In addition, with this method pain-transmitting nerves in the periosteum are obliterated. As an alternative, there is an arthroscopic procedure in which tiny incisions are operated on. Ilg: "The diseased tissue is notched and removed through the small access."

Exercises for tennis elbow - For treatment and prevention

Stretching involves stretching the extensor muscles of the wrist on the forearm. Stretching improves arm and wrist mobility. For the exercise, stretch out the affected arm with the back of the hand pointing towards the ceiling. Release your wrist so that the hand falls down. With the other hand, pull the hand of the affected arm towards your body. Hold the stretch for 30 to 45 seconds. Take a break of about 30 seconds. Repeat the exercise three times. Stretching exercises are useful about twice a day. 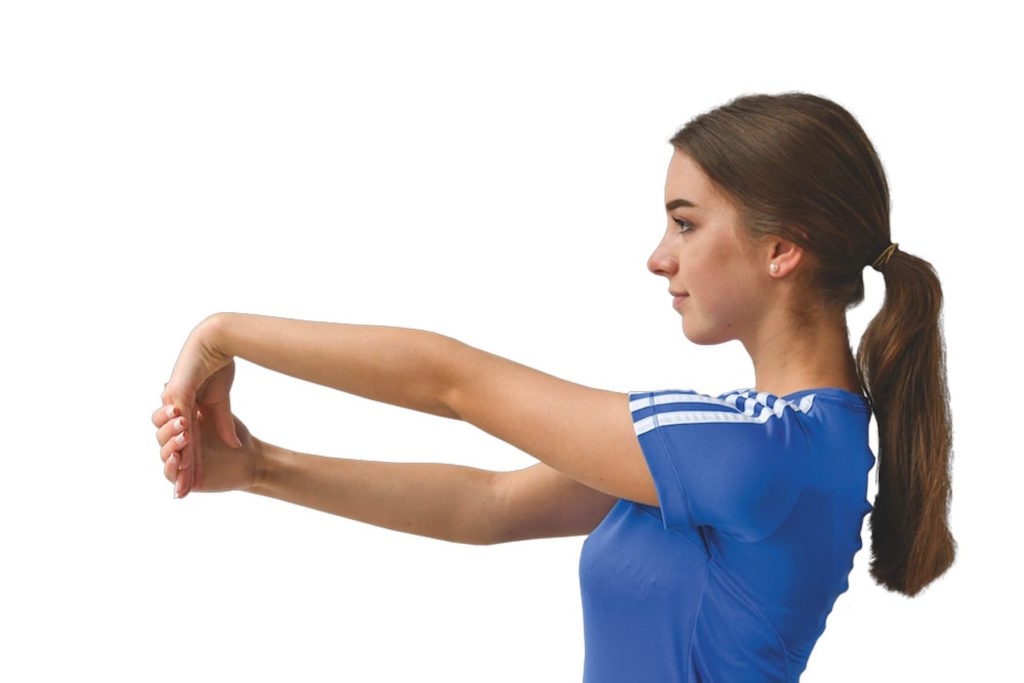 So-called eccentric training is ideal for treating and preventing tennis elbow. To do this, hold a training stick or simply a rolled up towel in front of your body with both hands. The hand of the unaffected side turns the exercise stick as far forward as possible (like when starting a motorcycle). The wrist of the affected side initially remains in the starting position. Then the hand of the diseased side also turns forward. At the end, both hands are again parallel to each other. Start with 15 repetitions a day. Later increase to 2 x 15 or 3 x 15 repetitions per day. 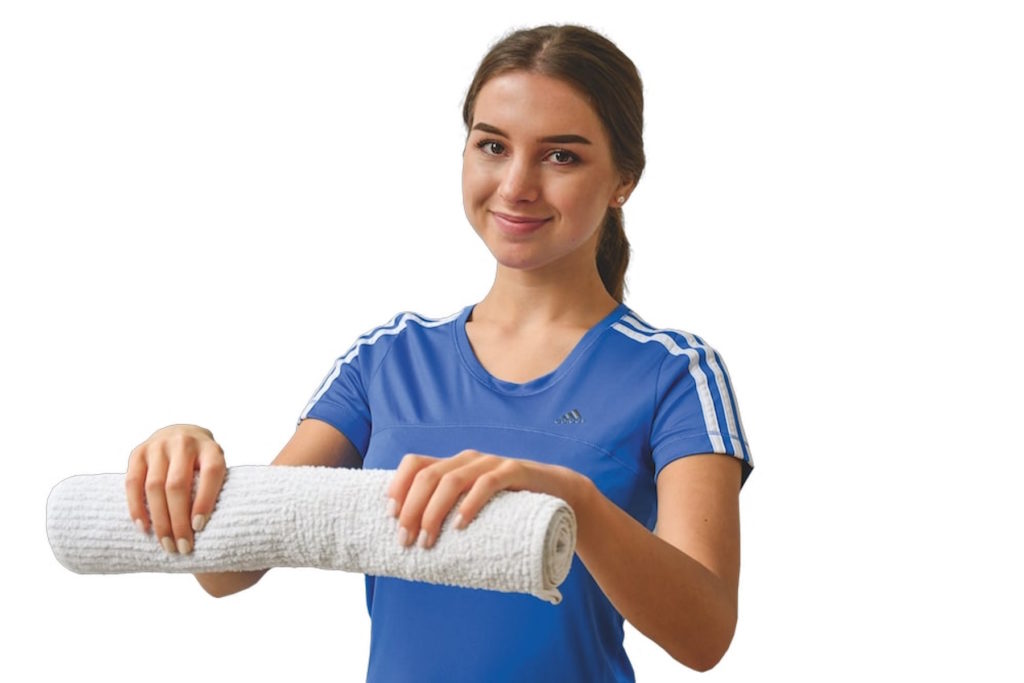 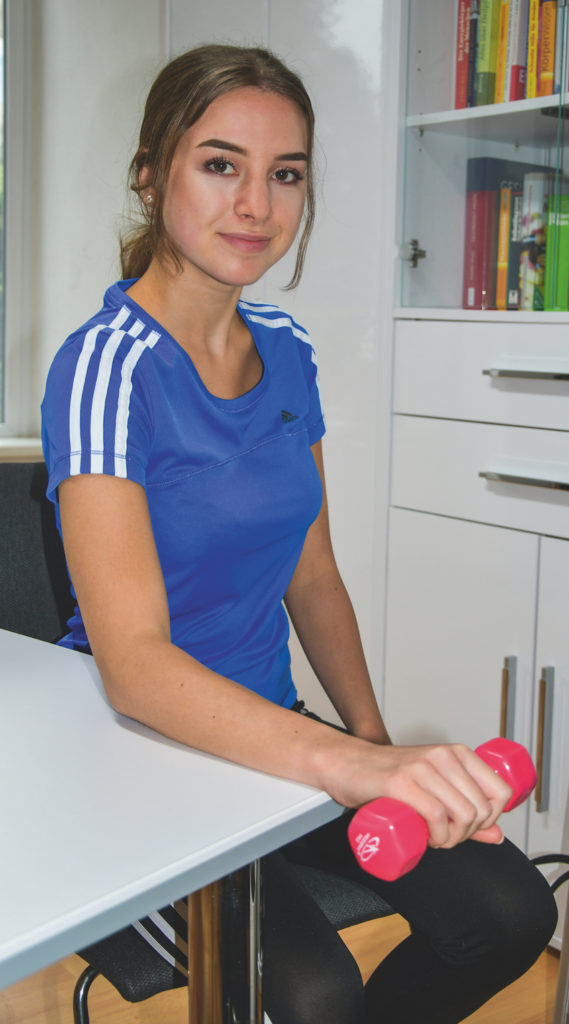