What is Logistic Regression Object Create

Now we want to include the travel class in our model and thus examine Hypothesis 3. The class is also a factor that has 3 characteristics. We look at the levels:

The three classes are coded with 1, 2 and 3, with the 3rd class being the reference (since it comes first). We have to take this into account when interpreting. Let's look at the results:

This time, all predictors are significant - that too Age. Before we move on to the interpretation, we want to check the addition of the class for significance as a whole. We can see from the output that each dummy variable has significant predictive power in itself, but we want a significance decision for the variable Travel class perform as a whole and use the likelihood ratio test (\ (\ chi ^ 2 \) - difference test).

We already know this from the hierarchical regression session. However, we don't have it here restricted To do likelihoods, so we can omit the argument! We also do not check any variances here, so that we can interpret the \ (p \) values ​​as they are output.

The test yields a significant likelihood difference, \ (\ chi ^ 2 (df = 2) = \) 102.674, \ (p <.001 \). The test here has 2 degrees of freedom, since two dummy variables were also included in the model! Consequently, class membership improves the prediction of the probability of survival of the Titanic disaster.

In order to interpret the results in a meaningful way, let's look at the odds ratios again:

We want to take another look at the same results graphically. To do this, we have to perform a prediction using our model again. The prediction and the appending to the data record is carried out in the same way as above:

However, we still have to merge the group membership into a variable. We have two variables that indicate group membership: gender and travel class. However, we want to have a total of 6 separate lines drawn. To do this, we use a trick: we transform gender and class back into numbers. We do this in two steps, because as soon as you think in terms of factors, it re-codes internally so that the reference category is always the 1st factor. Hence, if we simply applied the function, the factors in the order in which they are listed at would be converted to numbers from 1 to maximum number of categories. For this reason, we first convert the numbers into letter chains / strings by applying and then we dare to transform them into numbers. We look at this using the example of gender by displaying the first 6 elements:

So after we have converted the factors back into numbers, we then multiply the gender by 100. So that stands for women and that for men. If we now add up the class membership, we get 6 different numbers: = women from the 1st grade, = women from the 2nd grade and = women from the 3rd grade. Stand accordingly, and each for men from 1st, 2nd and 3rd travel class. If we now declare this variable as a factor again, we can use it to generate the desired graphic:

Of course there are other ways to determine this grouping variable. You have now experienced first-hand how well thought out the data must be so that a graphic can be easily created! If you are further interested, you can also take a look at the edited session by Martin Schultze: Graphics with (this is of course purely voluntary!). Now we can create the graphics in the same way as above, where we only have to change the names for the color, the model and the title a little: 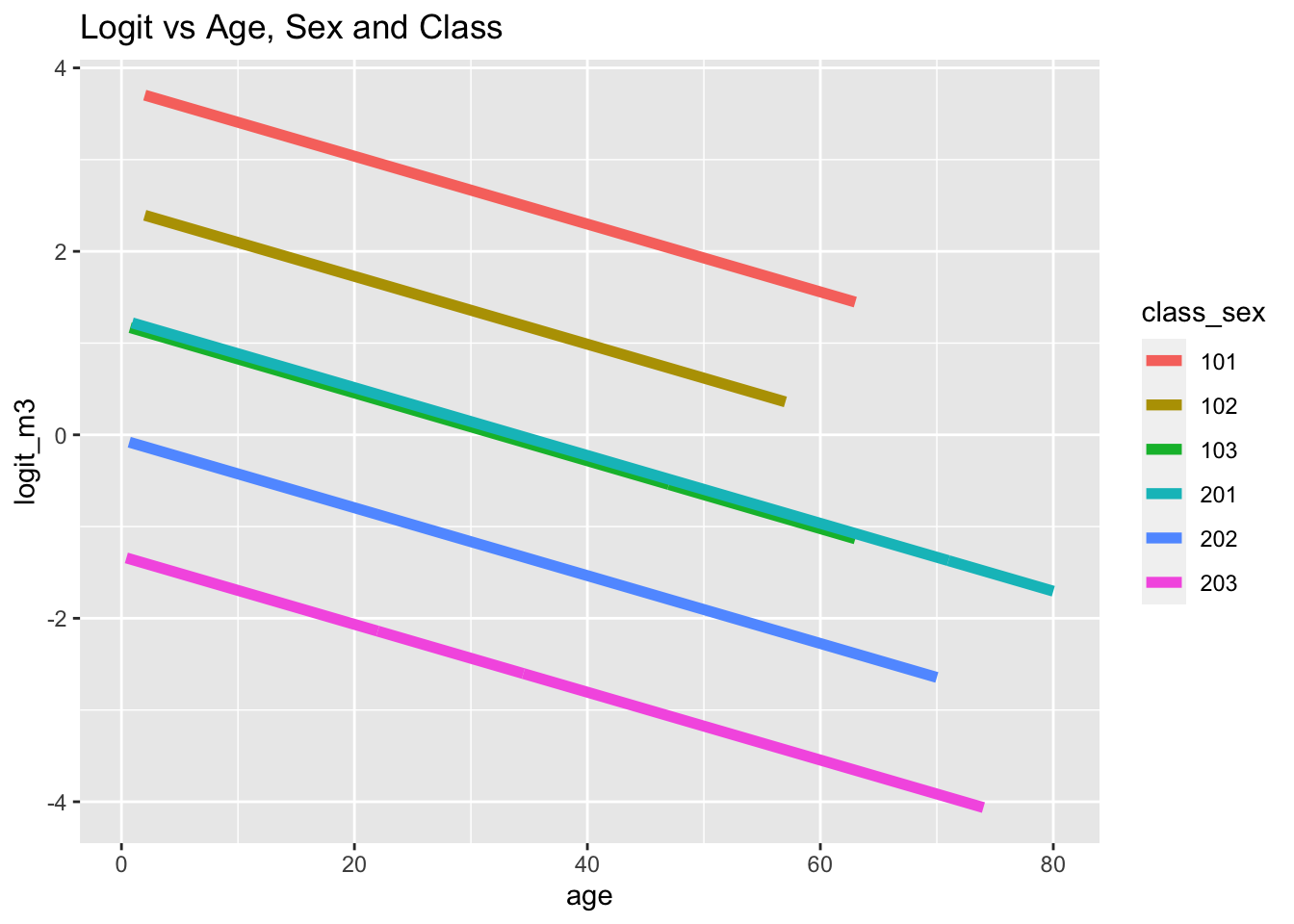 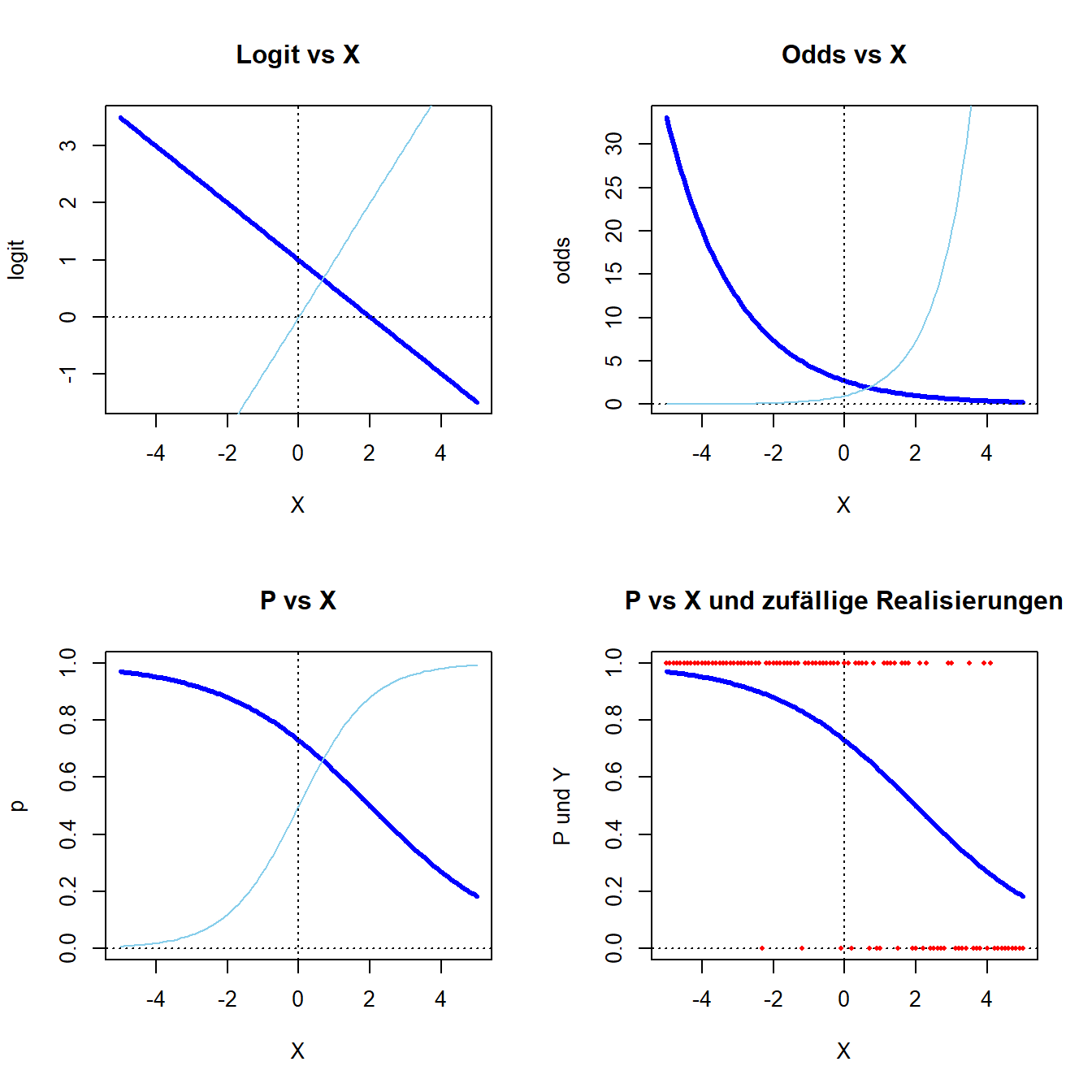 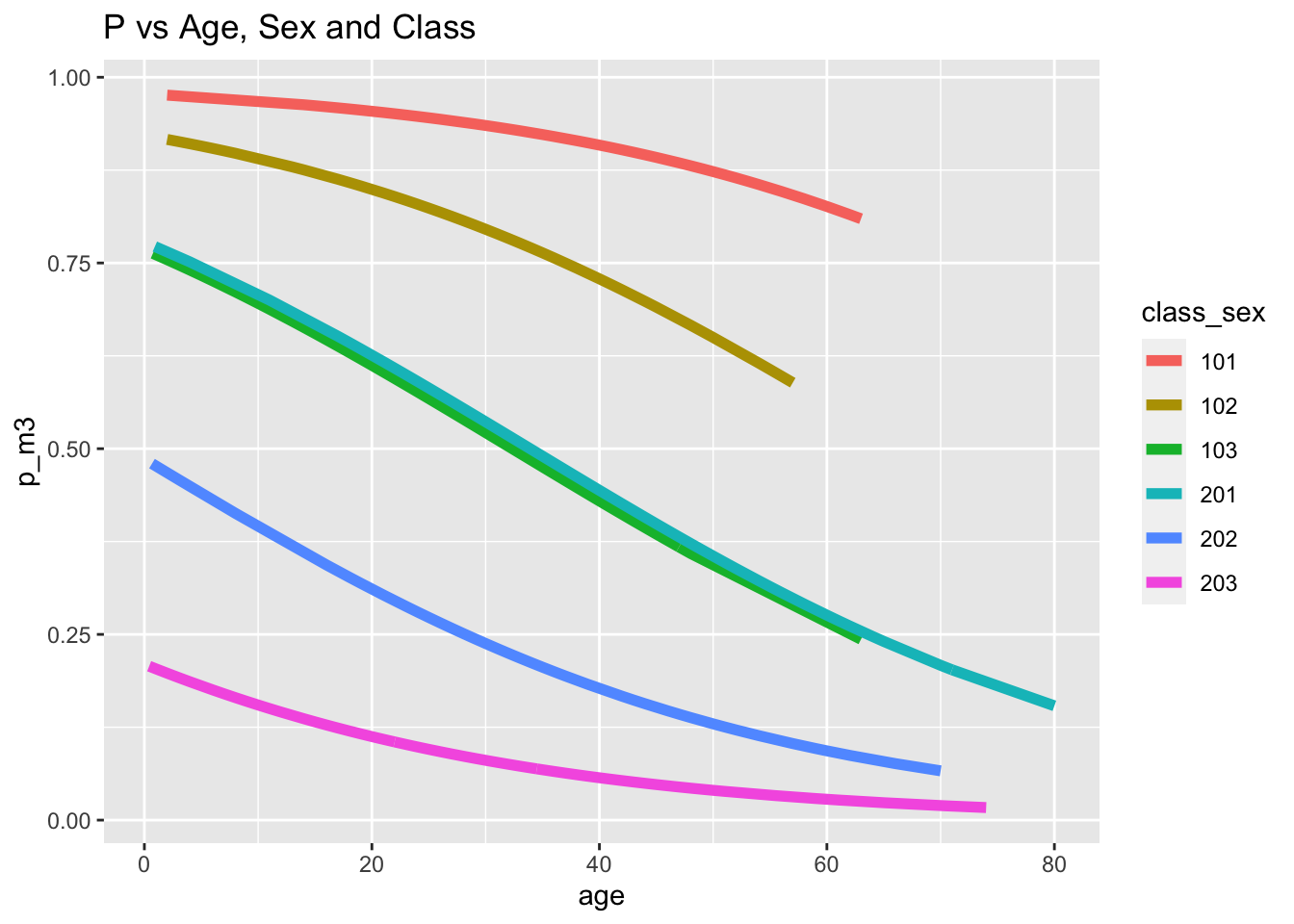 Finally, we can state that all three hypotheses are likely to be fulfilled and that age, gender and class all influenced the probability of survival in the Titanic disaster.

You can download the entire code used in this session here.