1 degree is an acute angle

This article deals with the use of the set square and the entry of angles. Then you should know how to enter angles in a drawing and what different angle names there are.

The set square is a drawing device for mathematics, which enables so-called angles to be entered. Now some will ask: what is an angle? Well, imagine two straight lines that intersect. An angle forms between these. We'll go into this with a few examples. Before that, however, first of all a graphic that shows you what a set square actually is: 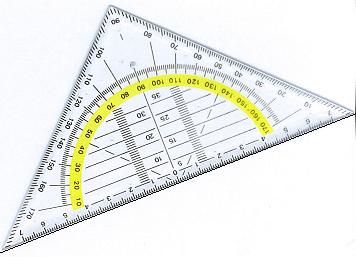 And this is how it works if you have to enter an angle yourself:

The 90 degree angle and the 45 degree angle are two "important" angles in geometry. These occur again and again and are required for different applications. The following graphic shows you what these two angles look like.

There are different types of angles in mathematics. Different names are given depending on the number of degrees:

Working with the opposite angle, 360 degree angle

Take another look at the right angle. And imagine if the angle got even bigger. Then at some point 180 degrees will be reached, then 270 and if the two straight lines are on top of each other, you have reached a 360 degree angle. The stupid thing about the set square is that it only shows the degrees from 0 to 180. So what do you do if you want to draw 200 degrees or 260 degrees? There is a little trick to do this: