Google is finally abolishing the Feedburner

The Feedburner from Google should be known primarily to bloggers and podcasters, because they have used the service relatively often so far. Since the feed burner's counter has been permanently at zero for several days, the assumption was that the service is at the top of Google's list of abolitionists. As Techcrunch now reported, the suspicion has just been confirmed. The services of the feed burner including the Adsense for feeds will be released on October 2nd. discontinued and finally abolished on December 3rd, 2012. 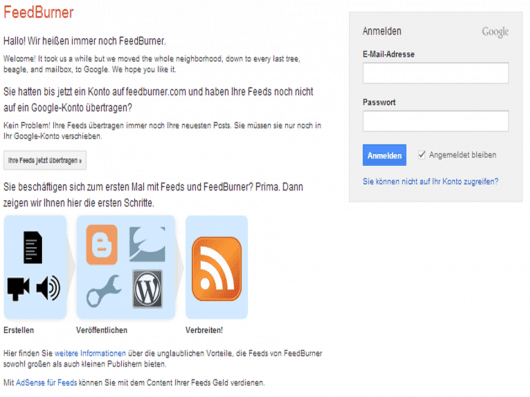 Feedburner is a service that primarily had benefits for bloggers and podcasters. The service allowed its users to bring together various feeds or to collect statistics on their RSS subscribers. In 2007, Google put an impressive sum of 100 million US dollars on the table for the takeover of the Feedburner. However, little has changed since the takeover. A few years ago some bloggers were allowed to test a new design, but in the end the redesign was never fully rolled out and stayed with a test. As early as July of this year, there were first indications that Google no longer had any real interest in continuing the service, as the Twitter account and even the Feedburner blog were closed at that time.

With the deactivation of the feed burner, the previous users are unfortunately no longer able to use the Adsense for feeds. With the help of Adsense for feeds, bloggers could earn additional money by integrating Google ads into their feeds and then displaying them in a target group-oriented manner.

AdSense for Feeds enables web publishers to make money by including targeted Google ads in their feeds. AdSense for Feed works just like the rest of the AdSense program: it serves ads that are relevant to your content and readers. The fact that this option is no longer available should be a painful process for many users.