How do changes in sea level affect Miami?

Coasts and coastal cities are particularly vulnerable to the effects of man-made climate change - the rise in sea levels affects them directly. All G20 member states and many of their most populous and economically strongest regions are already directly affected by the rising floods. Since 1880, sea levels have risen by around 20 cm on a global average, albeit with large regional differences.

In the coming decades, sea level rise in combination with local factors (such as erosion or land subsidence due to the abstraction of groundwater) will pose major challenges for numerous G20 coastal cities. For example, it is to be expected that floods will become more frequent - and that they will be more severe.

The amount of damage to be expected and the costs for necessary protective measures depend heavily on how global greenhouse gas emissions develop in the coming years. Rapid and ambitious climate protection measures can significantly limit damage and costs. 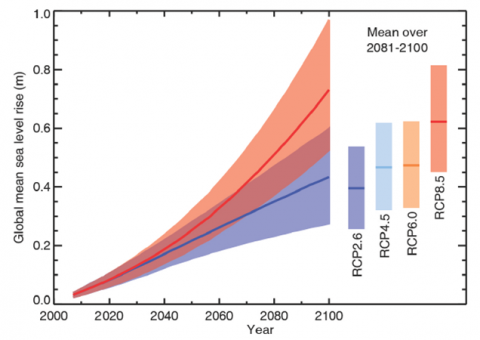 The sea level cannot be precisely predicted. In its last status report from 2014, the Intergovernmental Panel on Climate Change (IPCC) put the increase by the end of the century for unchecked emissions at 52 to 98 centimeters (red curve in the adjacent graphic).1 However, the model calculations generally do not take into account the melting of the Greenland and Antarctic mainland ice, so the actual increase could be higher.2 The Antarctic in particular seems to be more unstable than previously thought3 - by the year 2100 it alone could cause more than a meter of sea level rise.4

Climate change contributes to the rise of the seas through two main mechanisms: The water masses in the oceans expand due to heat, and mountain glaciers and the ice sheets in Greenland and Antarctica are also dwindling. Because of the long reaction time of the ice masses to a warmer climate, the full consequences of today's greenhouse gas emissions will only be felt in many decades or centuries. The conclusion of an international study from 2016 on the rise of sea levels was: "Political decisions of the next few years will have far-reaching consequences not only for this century, but for the next ten millennia and beyond."5

Risks to the living space of hundreds of millions of people

According to estimates by the IPCC, the rise in sea levels will threaten the settlements of hundreds of millions of people by the year 2100, with East, Southeast and South Asia being most affected.6

A study from 2013 put the number of people affected by floods annually at the beginning of the century at around four million worldwide. With unchecked emissions (and without adaptation measures) the number would rise to around 262 million people per year worldwide by 2100 - even with strong emission reductions, 117 million people would still be affected annually.7

Another study examined the world's 136 largest port cities: According to this, a combined total of 38.5 million people are currently exposed to the risk of being hit by a flood once every hundred years. In 2070, the number will more than triple to around 150 million people as a result of rising sea levels (and other factors such as urban growth). Coastal metropolises in Asia are particularly hard hit, but Miami is showing the greatest growth rate. Of the 20 coastal metropolises worldwide in which most people are threatened by a flood of the century in the 2070s, twelve are in the countries participating in the 2017 G-20 summit (see table).8

In the United States, by the end of the century, a three-inch rise in sea level would flood areas that are home to 4.2 million people.9 In the longer term, i.e. in the following centuries, with unchecked greenhouse gas emissions, the increase would be 4.3 to 9.9 meters - which alone would cause around 20 million US citizens to lose their place of residence.10

Trillions of dollars worth of buildings and infrastructure threatened

Extreme weather conditions caused by the climate can cause very expensive damage, as was shown by Hurricane Katrina in 2005: In the ports in the US state of Louisiana alone, there was damage amounting to around 1.7 billion US dollars, some of which were completely destroyed.11

The aforementioned study of the world's 136 largest port cities showed that their vulnerability would increase dramatically over the next few decades: In 2005, values ​​of around 3,000 billion US dollars were exposed to flood risks, which corresponds to around five percent of the world's gross domestic product (GDP) - 2070 would be a sea level rise of 50 centimeters already threatens values ​​of around nine percent of global GDP. The potential damage is particularly high in ports in industrialized countries, for example in the USA (Miami, New York / Newark, New Orleans), Japan (Osaka / Kobe and Tokyo) or the Netherlands (Amsterdam, Rotterdam). Many of the ports where the potential damage is increasing particularly strongly are in other G20 countries, for example in China (Guangzhou, Shanghai, Tianjin) or India (Calcutta, Mumbai).12

Other studies also showed sharply increasing risks. For 2050, flood damage of 60 to 63 billion US dollars was forecast in the 136 largest coastal cities - the twenty cities with the highest expected damage are almost all in G20 countries, in addition to the cities already mentioned, Guayaquil (Mexico) and Shenzen (China) are among them ) and Ho Chi Minh City in this year's G20 host country Vietnam.13

The entire consequences of man-made CO2-The emissions only show up if you look over many more centuries. The emissions of the present will drastically change the geography of many countries in the long term: Large stretches of land, on which megacities still stand today, will then be in the sea. The graphic below shows simulations for some of the countries participating in the G20 summit: the purple-colored areas will be covered by the sea in the next millennia, cities marked with yellow circles (today) have a population of more than ten million each.14 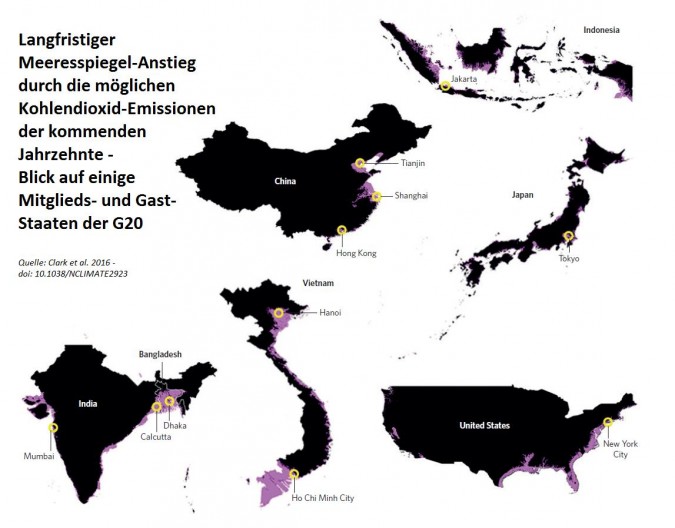