Learning which language will change your life

Language learning in the future
"New technologies will change learning"

Will we still learn foreign languages ​​in the future? Or do we have programs that translate languages ​​simultaneously? How will digitization change teaching? In an interview, trend researcher Peter Wippermann creates visions of how (language) learning will develop in the future.

Mr. Wippermann, when did you learn your first foreign language?

I learned english in school. It was very traditional: I learned vocabulary, interpreted texts, and gave answers in English in the classroom. Unfortunately, schools in Germany are not much further ahead today.

You say it is regrettable that pen and paper still dominate when it comes to language learning. What technical possibilities would there be to convey languages?

In the digital space, speech recognition by smartphones, Alexa or Google is a matter of course. This development is sure to change language learning. The written representation will decrease significantly, automated translations will become a matter of course. Schools in Germany are not yet prepared for this.

Could there also be programs with which one can move through foreign countries on the home screen?

A lot is currently being tested in the audio sector, so that through interactive listening one is able to learn a foreign language without being able to write it well. That's just the beginning. The use of artificial intelligence in language learning is still in its infancy. Whenever programs are able to link visual worlds with audio examples, completely new possibilities arise. Virtual reality could also make it possible to learn languages ​​as if we were moving in another country.

Does that already exist?

So far this has not been very pronounced in language learning, but such scenarios do exist in the games industry. Attempts to link smartphones with virtual reality have been tried out for two years. However, the technologies are still far too expensive. But I am sure that the technical world will replace the analog in many areas.

Are you also thinking of digital teachers here?

Teaching robots are used in Japan - here in Germany there is a great deal of skepticism towards robots. We don't use the funds to try that either. However, we have to be aware that artificial intelligence is still at the very beginning, but will change our lives significantly. The research institute of the American military assumes that in 2025 we will be working with quantum computers that will be 100 million times faster than a normal PC today. We are going into a future that polarizes - but one that brings with it completely new conditions.

"Our life will change"

What does that mean for future learning?

In the past few years we have accelerated learning in Europe. In Germany, industrialized learning was created through the introduction of the Bachelor's and Master's degrees. It's about standardization, acceleration, increasing efficiency. What comes out, machines will do much better in the future. Jack Ma, the founder of Alibaba, says we have to be creative above all - but we don't learn that at all.

How could creativity be taught in schools or colleges?

I don't presume to formulate concrete ideas - but today's learning goals will disappear. Language technologies will be omnipresent in ten years' time and the question is whether we will then still need the written representation of information. The likelihood that you will no longer write texts in everyday life, but instead talk to machines, is very high.

But I am happy when I can read information that is relevant to my everyday life or job.

They also come from a time when this technology didn't even exist. In Germany, 47 percent of young people under 25 prefer to meet in virtual space than in the real world. The younger people are, the more they embrace new technology. Live videos have long since replaced postcards or letters. However, digitization only plays a minor role in teacher training. That should change.

Do you still have to learn languages ​​in the future? Programs could do that for me too.

Language programs will take over a lot, but human contact will remain. Technology cannot replace human closeness - and that is why we will continue to learn languages ​​in the future. I imagine it will be like this in the future: We are digitally connected to one another as a matter of course. However, speaking and understanding one another personally will continue to be important.


The trend towards demarcation and autonomy

Don't you find it problematic that you reveal so much data about yourself in the digital world?

I see it realistically: if you use data, you also produce data. This data is stored - and not just in your own country. The moment you sign a contract with Google, Google decides where the data goes and not the Federal Republic of Germany or the European Community. This is a misconception that many are subject to.

At the moment, states are strengthening their own autonomy again. The term Heimat appears again in Germany. How do you explain that?

This is a development that worries many. The utopia of globalization has produced a downward trend towards national isolation. This can be observed not only in America, Turkey, Hungary, Poland or Denmark, but also here. People wonder who they actually are. This is where language begins to take on a creative value. You try to locate yourself in order to reduce complexity in small spaces. I think people are trying to slow down the rapid changes in technology and power structures. We'll wait and see where that leads. 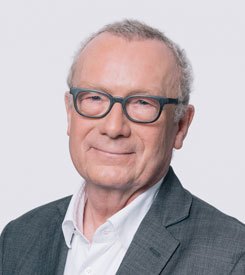 Photo: © ProSiebenSat1Peter Wippermann taught as a professor for communication design at the Folkwang University of the Arts in Essen until 2015 and is the founder of the Trendbüro - an international trend research agency with offices in Hamburg and Munich. Together with Jens Krüger, managing director of the market research institute Kantar TNS, Peter Wippermann publishes the value index every two years. For the index, the researchers examine how Internet users discuss values ​​in blogs, communities or forums. For the 2018 index, images from Instagram were also evaluated for the first time. The current evaluation shows that traditional values ​​are gaining in importance. The importance of success is declining, nature came first for the first time, followed by health and family.
<?