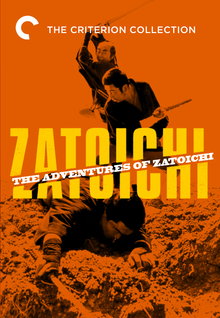 The 9th Zatoichi film was released in 1964 under Kimiyoshi Yasuda's direction, who was also responsible for the 5th film "Zatoichi on the Road".

On his hikes, Zatoichi meets a young man who asks him to deliver a letter to a girl named Osen. Ichi agrees and only knows that it is not a love letter, but nothing more. It is later learned that the man named Shinsuke is Osen's brother and is planning a revenge murder on a certain Jinbei.

In the further course Ichi meets a talented swordsman whose only desire is to meet an equal opponent, whom he now believes to have found in Ichi. Ichi refuses because he doesn't want anyone to be injured before the New Year celebrations, but the fighter insists on the duel, which should take place on New Year's morning.

The beginning is atmospherically very cheerful and shows a sympathetic, good-humored Zatoichi. After a long time there is also a little romance for Ichi, as you know it from the first films. You can also find out here that Ichi last saw his father when he was 5 years old and longs for him. For much of the film he finds a kind of father figure in an allied alcoholic who helps him, but ultimately stumbles in the back out of self-protection and fear of the yakuza. He begs Ichi for his life, who replies that he saw his father in him and could not kill the man who made him feel this way.

So you immerse yourself a little more in the psyche of Zatoichi and get to know him a little more. Action is rare and there are actually only two short fight scenes, one in the middle of the film when Zatoichi sends several opponents across the Jordan in the usual skillful manner in a forest and then in the finale, where the inevitable duel against the swordsman takes place. This showdown is accompanied by a minimalist and darker gong sound, which seems very suitable for the scenery.

What is noticeable in the fights is that, contrary to the development of the previous parts, they actually appear completely bloodless again, which surprised me a bit at the point. It could have been the director's work, but as I said, there wasn't much action anyway.

Part 9 is a bit more melancholy and in places also darker, also a tad too calm, but overall I was entertained well here as well. 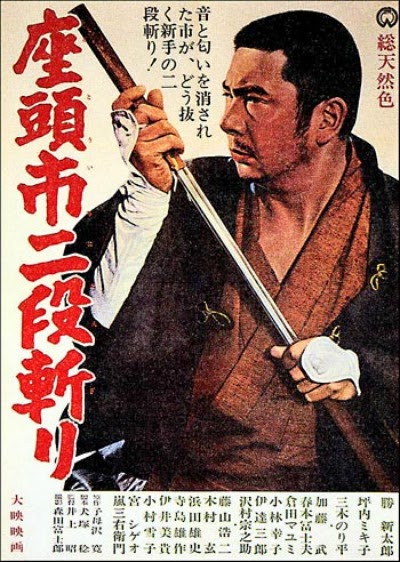 Zatoichi's Revenge is the 10th film in the series and was released in 1965, directed by Akira Inoue, who made his only contribution to the franchise with this film.

Ichi returns to his old village after 10 years to see his massage teacher again, but he has to find out that he was murdered just two weeks earlier and that his daughter Osayo was abducted to the local brothel.

The story is of course structured according to similar patterns as one often knows from the previous Zatoichi films with the usual corrupt officials and yakuza who exploit the simple population and, like usually a certain ronin or samurai who wants to challenge Zatoichi to a duel, however one is more personally involved here, since the story here concerns Ichi personally because his teacher was killed. Ichi tries of course to find out who is responsible and at the same time wants to free Osayo. The local gangsters are not happy about Zatoichi's interference, the greater the anger when he steals 100 ryu from them while gambling. In order to turn him off, he is to be lured into an ambush, which at first seems to work when an innocent man and his daughter are drawn into the matter and the little one steals Ichi's sword with a ruse so that she and her father are not separated.

Except for a short fight at the beginning and an equally short one after about 1 hour, action is rare, but the film lives very well from storytelling and of course Shintaro Katsu's presence and charisma. So there is also room for humorous moments in this rather gloomy story. Exemplary and beautifully ironic is the scene when Ichi refines a dish with a lot of wasabi and of course it gives him a lot of "fire" whereupon he says to the host that the spiciness has knocked his eyes out of his head and he can no longer use it see. Great scene that exemplifies Ichi's positive disposition.

As I said, film number 10 strikes a darker and more serious tone with the subject of the exploited and partly young girls in the brothel, who are forced to act with the use of force, although some humorous elements by and large. Even if the violence in this regard takes place more off-screen, but you can hear the screams of the girls when they are beaten and beaten, this has its effect and contributes to the serious tone.

The showdown finally offers an action-packed ending with some long takes in which the camera literally looks over Zatoichi's shoulder while he is working his way through the opponents with great serenity and thus radiating a strong determination. The choreography is well worked out, but blood is only used minimally.

All in all a successful contribution, as Zatoichi's Revenge shows a few new facets and thematically stimulates thought. 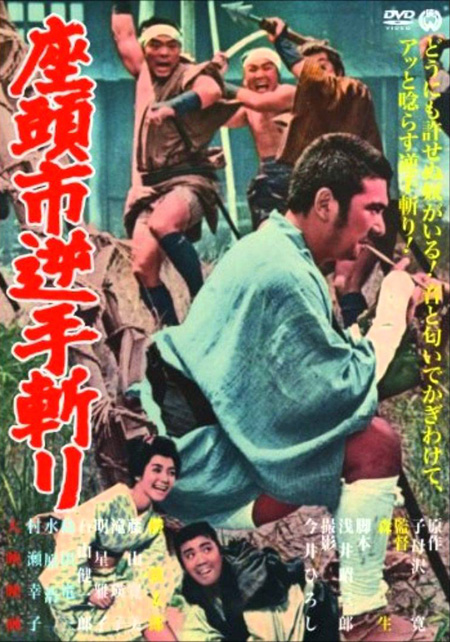 Director Kazuo Mori was already responsible for the second offshoot of the series from 1962 and returned after a 3 year and 8 film break for another work about the blind swordsman, which by the way was not his last work in this series.

This 11th film in the series has a good atmosphere and at times a humorous note. In Zatoichi and the doomed Man you get a rather unusual beginning of the film when Ichi is kneeling on the floor and being punished for something with cane blows. And right away he knocks out another line that still makes you laugh when he asks if you can't split the blows because he can't stand the pain much longer and it has already made him blind. It is such scenes that repeatedly bring the cheerful spirit of the likeable main character closer to you, apart from his always selfless heroic deeds and the willingness to help strangers.

In the next scene we learn that Ichi is only in jail for one night for illegal gambling, where he meets Shimazo Katase, a man who, as he himself claims, wrongly uses for acts he has not committed. Shimazo asks Ichi for help. Social as this is, you can see him in the following scene already wandering to the place where he stops at the place name sign and ironically notes that he gets in trouble every time someone asks him for such favors. He decides to go the other way to avoid problems, but as we all know, it ultimately leads our hero to the said place, where he first meets a young man who is a petty crook while archery and later uses Ichi's name to make a profit from it, which is almost fatal for him, because it is well known that many people strive for Ichi's life and it is precisely this that saves him at the last moment.

In the further course there are a few good twists, first and foremost, of course, the fact about Shimazo's son. The action is more impressive here, as there are some good fights, especially the extended final against numerous opponents in a foggy fishing village is great to watch. The atmosphere in front of this backdrop is great and the choreography of the fights is one of the best in the Zatoichi series so far. Fans of good chambara fights will have a lot of fun here. 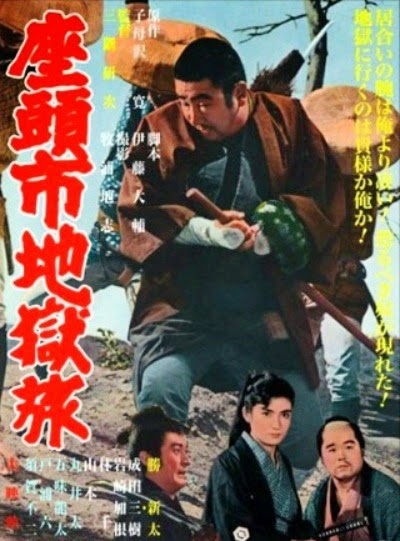 Zatoichi and the Chess Expert is the 12th film about the blind masseur and was directed by director Kenji Misumi, who is also responsible for the first and the 8th film.

At the beginning, Zatoichi boarded a ship, on which he then spent the trip with his favorite pastime, gambling. It is wonderful to see how he takes the people who see him as easy prey for their money.

On the ship he also meets the said chess expert, Tadasu Jumonji. A very honorable man who already showed his good heart when Ichi stumbled over the plank to the ship and threatened to fall into the water. Tadasu helped him. In their ongoing chess games, he says he fights to kill and to win, be it with the sword or at chess, finding it is not a fair duel, he blindfolds to create equal relations with Zatoichi. A man of honor, but what's behind it?

In an argument in which Ichi is involved, a little girl is injured through no fault of her own. Ichi takes care of her and pays the treatment costs, which her foster mother Otane cannot afford. Exactly, Otane. A well-known name that is inevitably linked to strong emotions in Zatoichi, he was very close to his Otane of his time. But this woman, who happened to be named by the same name, has feelings for Ichi, who, as always, does not want to drag anyone into his dangerous existence. So you experience a rare, almost intimate moment between the two of them, on an emotional level, but there is nothing more than that.

There is a twist to Ichi's companion and said Chess Expert, but in the end I didn't really agree with that. Ichi learns from a customer that Tadasu has his father on his conscience, but nobody knows who drew the sword first. Turning this into a personal feud did not suit me here. Sure, Zatoichi has a sense of justice but here he just switched sides too easily and unconditionally because the situation was not clear and Tadasu treated him with honor.

In terms of action, there is a short fight at the very beginning. However, the one in the middle of the film in the night reeds by the water is very nice, where Ichi moves quietly like a ninja. In the finale there is a nice highlight in this regard when it comes down to the confrontation between Ichi and his companion Tadasu and both continue their mind chess game during the march, more and more intensely, which ultimately leads to the drawing of swords.

All in all, this Zatoichi film is solid to decent, but it could have been one of the best of the series. In my opinion, a lot of potential has been wasted here and the story has been too carelessly subjected to this twist towards the end. Apart from that, the film offered some new aspects within the series and was currently very strong on an emotional-human level. In the second half there were 1-2 easy lengths.