What is most of America about America 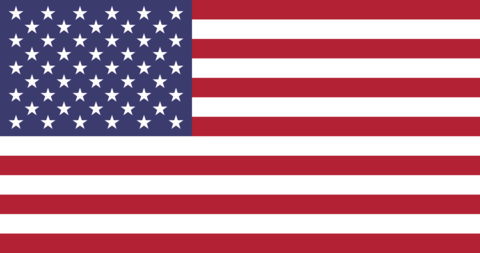 The United States of America is in North America. Mexico in the south and Canada in the north are the US neighbors. Alaska is also part of the United States, but is located northwest of Canada. The country borders the Atlantic Ocean to the east and the Pacific Ocean to the west. The USA is the economically and militarily most powerful country on earth.

The United States is made up of 50 states. In a difficult process, the president is elected every four years through electors by the people. He is both the head of state and the head of government. In parliament, the so-called Congress, directly elected senators and deputies determine the laws of the country. The democratic constitution is over 200 years old.

The White House, where the American president lives and works, is in the city of Washington on the east coast of the country.
New York, where the United Nations is based and the Statue of Liberty is on an island in the middle of the harbor, is one of the most famous cities in the world. San Francisco and Los Angeles are also famous, especially its district, the film metropolis Hollywood.

The majority of Americans are of European descent. About 11 percent are African-Americans whose ancestors were brought here from Africa as slaves. In the past few decades, many Spanish-speaking people have immigrated from South America. That is why Spanish has now become the second most important language in the country. The natives, Indians with different languages, hardly play a role in public life.

The United States is the fourth largest country in the world. Because of its size, it has many different and impressive landscapes to offer: high mountains, forests, flat plains, beaches and swamps. No wonder most Americans spend their holidays in their own country!

In your everyday life you will hear, see and taste many things that come from the USA. For example hip-hop and rap music, Disney's animation and Hollywood's action films, hamburgers and Coca-Cola. The sports basketball, baseball and American football are also typically American. The citizens are very proud of their country and its values. So it goes without saying that the American national anthem is heard at school or at sporting events, for example.