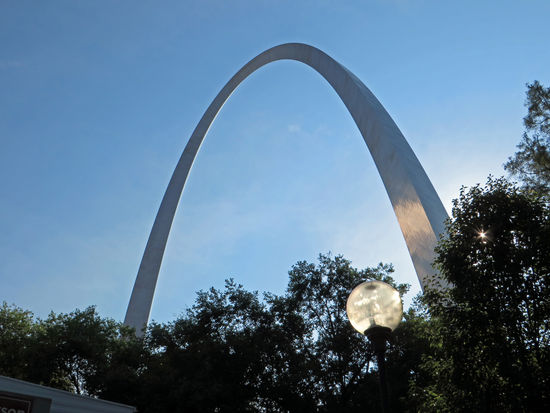 St. Louis is a city of approximately 320,000 people on the west bank of the Mississippi. The population is falling as more and more people move to the suburbs.

Saint Louis also bears the nicknames "The Gateway City" and "Mound City" as well as the scene names "The Lou" and "Nellyville" made famous by the local rapper Nelly.

The city used to be a major railway junction, but passenger transport is no longer an issue today.

In 2006, St. Louis topped the list of the most dangerous cities in the United States.

The French merchant Pierre Laclede Liguest and his New Orleans stepson Auguste Chouteau founded St. Louis in 1763 as a trading post. St. Louis was under Spanish control after the French and Indian War (1763), then it was part of France.

The United States acquired the city under Thomas Jefferson. Later, St. Louis became the starting point for many expeditions to the west such as the Lewis and Clark Expedition. Many settlers also started west from St. Louis.

At that time, St. Louis was the fourth US city after New York, Brooklyn and Philadelphia with a population of 310,000. At the turn of the 20th century, the "Gateway City" was predicted to have a bright future due to its favorable location as the gateway to the west.

In the 19th century there was a large influx of German immigrants to Saint Louis. The German share of the population in 1860 was around 60,000 out of 170,000 inhabitants. The large brewery Anheuser Busch was founded in 1870. Today the headquarters of the brewery with the well-known beer labels "Budweiser" and "Bud Light".

The Church of St. Frances de Sales was built for the German Catholic community between 1895 and 1908.

The largest population reached St. Louis in the 1950 census with 856,796. Since then the population has been decreasing continuously. The move from the city center to the surrounding area is particularly noticeable in the area around St. Louis Place Park and around the formerly glamorous St. Louis Avenue, on which horse-drawn trams were already running in 1875.

Complete historical blocks of houses have been demolished there since the 1950s or testify, mostly as neglected ruins, of the once neat splendor of this up-and-coming quarter, which was particularly popular with German immigrants, since the 1880s. There were German congregations of all denominations and schools in which German was taught.

The landmark of the city is the Gateway Arch, a 192 m high arch designed by Ero Saarinen.

The Jefferson National Expansion Memorial (Memorial to the national expansion by Jefferson) indicates with its current location to the starting point of the Lewis and Clark expedition.

The central structure of the memorial is the 192 m high gateway (archway) accessible to the public. In addition to the arch, the ensemble of the memorial includes the old courthouse and the Museum of Westward Expansion, which is located underground and below the Gatewaxy Arch together with the visitor center.

The Basilica of Saint Louis, King of France, stands on the eastern edge of the park area. However, the former cathedral of St. Louis is not part of the memorial. The church (first built in 1770, today's construction 1831-1834) is near the Gateway Arch. Due to its historical importance - it was the first cathedral west of the Mississippi River and until 1845 the only parish church in the city of St. Louis - it was left intact , while all of the neighboring buildings were demolished to make way for the Gateway Arch.

The Old Courthouse (Old Courthouse) is a representative building erected in the Grek Revival style from 1816 to 1864, which served as a federal and regional court. The building was the venue of the historically significant trial of Dred Scott against Sandford, in which the black Dred Scott had sued for release as a slave.

The courthouse is located opposite the Gateway Arch. The multi-wing structure is dominated by a 58.5 m high dome structure rising centrally behind the main wing. The structure remained the tallest in the state of Missouri until 1894. The white wings of the building have triangular gable fields, similar to the Parthenon on the Acropolis. The front facade of the main wing is formed by six Doric columns.

The Old Courthouse has not served as a courthouse since 1930.

The city of Cahokia, founded in the 7th century and a center of Mississippi culture, was about 10 km east of today's downtown area, on what was then the course of the Mississippi, the largest city in pre-Columbian North America.

In the 12th century it had a population of 8,000 to 40,000. This made Cahokia the largest city ever built north of what is now Mexico. Philadelphia only had such a population around 1800.

Cahokia was famous for its earth pyramids - mounds, similar to those of the Central American civilizations. The largest surviving Monk’s Mound has longer sides than the pyramids of Giza. The city was abandoned by its residents around 1400 for unknown reasons. When the first Europeans arrived in the city in the 17th century, everything was deserted.

The site of Cahokia is a UNESCO World Heritage Site.

Pictures on my husband's homepage, www.harley-rolf.de or on my Facebook page - www.facebook.com/Uschi.Rolf.USA.Canada 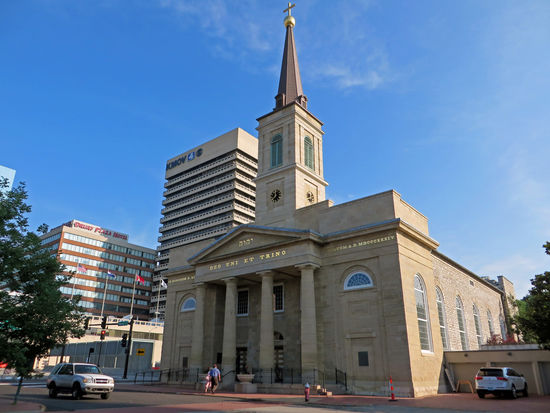