Animated films from Japan, so-called anime, are characterized by a staging style that differs significantly from productions from the USA or Europe and is often deeply rooted in Japanese culture. It is precisely this unusual, different narrative form that makes these films so attractive or provokes criticism.
As universally understandable as pictures seem, the differences in perception become clear when the direction of reading changes. Japanese books and comics, so-called mangas, are read - from a Western perspective - from back to front and from right to left. Therefore, on the one hand, the right image field in animated films has a special meaning - important plot elements appear on the right - on the other hand, viewing directions are given a different meaning: the gaze into the past, for example, is directed to the right out of the image and a diagonal direction of movement from top right to left According to the Japanese reading direction, the bottom tends to strengthen the dynamic and lead downwards, while from the western point of view it is interpreted as slowing down.

What is obvious, however, are the big googly eyes and the faces and figures made up of just a few lines, which have become the trademark of Japanese cartoons and with which they stand out clearly from the detailed background drawings. Sometimes the round shape of the eyes is interpreted as an orientation towards a western ideal of beauty. The explanation, however, is much simpler: Due to the large eyes and the emphasis on the pupils - the drawing style allegedly goes back to the famous manga artist Osamu Tezuka, who in turn was heavily influenced by Disney - a wide range of drawings can be drawn easily and quickly recognized by the viewer Emotions are represented. 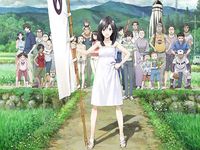 Summer Wars (Photo: AV Visionen Filmverleih)
It is true that animes have more leeway in this regard than mangas, in which every movement has to be brought to the point by clear, sometimes grotesque gestures for faster readability in a single image. However, certain codes have also established themselves in animes, some of which can no longer be deciphered without cultural background knowledge. For example, the hair colors of the characters have certain meanings for their character traits - and the black hair color is more typical, according to the Japanese reading, while blond is alien. As for facial expressions, sweat tropes indicate great exertion, red cheeks indicate shame, and nosebleeds indicate sexual arousal. With this knowledge, for example, the end of Summer Wars (Samâ wôzu, Japan 2009) by Mamoru Hosoda takes on a different meaning without becoming vulgar.
Katsuhiros Otomos Akira (Akira, Japan 1988) is regarded as the initial spark of worldwide attention for anime. Even the opening sequence broke the expectations of an animated film with all its might: Instead of static backgrounds, Otomo puts the viewer in the center of the action during an argument between two motorcycle gangs racing through the streets of a huge metropolis. With the lighting effects and the numerous changing settings and camera perspectives, the staging is based on real films - a technique that Otomo had previously used with individual image panels in his manga series of the same name. Also based on a common Manga style, Otomo takes up the concept of so-called speed lines, in that the background is reduced to lines due to the movement, thereby simulating the speed all the more. The result is a dynamic experience that blurs the differences between animation and real film. But even more than such expressively and rapidly assembled scenes, those who rely on contemplation rather than action are remembered.
Scott McCloud describes a typical series of images from Japanese comics in his book Read comics correctly as a stringing together of individual statically acting aspects. Basically nothing happens in such sequences of images - they are supposed to convey a mood. Exactly this style has been adopted by anime: When, for example, Major Kusanagi, a special agent with a cyborg body, suddenly begins to doubt her identity and uniqueness in Mamoru Oshii's science fiction classic Ghost in the Shell (Kōkaku Kidōtai, Japan 1995), she leaves on a boat trip through the metropolis. The film only strings together individual long shots in a montage sequence, which are linked by Kenji Kawai's score; an extremely contemplative scene that slows down the pace and conveys a feeling for the protagonist's feelings. Hayao Miyazaki uses this type of staging, for example, in Nausicaä from the Valley of the Winds (Kaze no Tani no Naushika, Japan 1984) and The Castle in Heaven (Tenkū no Shiro Rapyuta, Japan 1986) especially in scenes in which the protagonists / inside full of awe 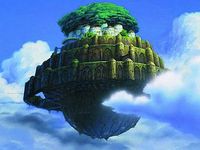 The castle in the sky (Photo: Universum Film)
Contemplating the beauty of nature: moments of grandeur in which Miyazaki also reflects the influence of Shinto. Makoto Shinkai is currently taking this style to the extreme: In his feature film debut The Place Promised in Our Early Days (Kumo no Mukō, Yakusoku no Basho, Japan 2004) he tells of the friendship between two boys and a girl in a near, alternative future. For one summer, the three teenagers long to reach the tall, narrow tower at some point, which they can see from afar - until the girl suddenly disappears. The staging conveys the strange feeling of those phases of life in which something changes and time seems to stand still. Shinkai embeds his characters in extremely realistic-looking, detailed background drawings and uses lavishly animated lighting effects. His pictures invite you to contemplate and sink in - pictures full of calm and poetry.

More on the topic at kinofenster.de:

You can find more texts with our search function.

The text is licensed under the Creative Commons Attribution-NonCommercial-NoDerivs 3.0 Germany License.
<?