How many variants does MG Hector have

With a length of 4.66 meters, a width of 1.84 meters and a height of 1.76 meters, the MG Hector is larger than its competitors Jeep Compass or Tata Harrier. Its ground clearance is 19.2 centimeters and its wheelbase is 2.75 meters. The SUV, on wheels up to 17 inches in size, looks powerful and present thanks to its chrome-plated radiator grille including a large MG emblem. Both front and fog lights and taillights work with LED technology from the super equipment. A reflector connects the two rear lights on the trunk lid, which provides access to the 587 liter luggage compartment.

A total of four equipment variants are available: Style, Super, Smart and Sharp. In the basic configuration, two USB ports, a rear seat that can be divided in a ratio of 60 to 40, a cooled glove compartment and rear parking sensors are installed as standard. The super equipment also includes the 10.4 inch infotainment system with Apple CarPlay and Android Auto as well as cruise control and a reversing camera. In the Smart version, the 17-inch series as well as Internet via SIM card plus navigation system and a seven-inch digital speedometer are on board. There is also keyless entry and start as well as an electrically adjustable driver's seat. The Sharp version comes to the customer with a rain sensor, sun canopy, electrically adjustable passenger seat, ambient lighting in eight colors and a 360 degree camera. 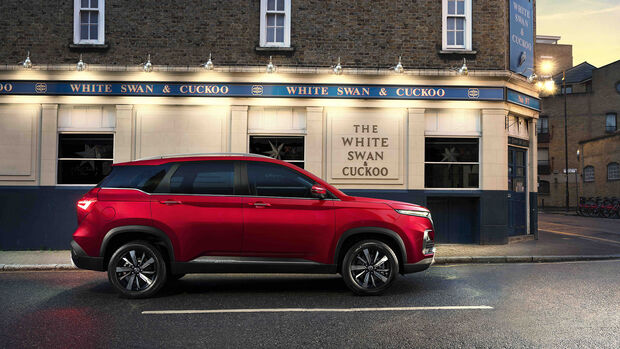 MG
With its wheelbase of 2.75 meters, the SUV is quite impressive.

In addition to a diesel engine, there is also a choice of two petrol variants. The two-liter four-cylinder diesel engine from Fiat has an output of 172 hp and a maximum of 350 Newton meters. It is shifted manually via a six-speed gearbox. Consumption should be around 5.7 liters per 100 kilometers. The four-cylinder turbo gasoline engine comes with 145 hp and 250 Newton meters. Here the customer can choose whether he would like to shift gears manually within the six-speed gearbox or leave the work to a six-speed dual-clutch gearbox. Consumption is 7.1 liters per 100 kilometers. The gasoline variant is also available as a 48 V mild hybrid and a manual six-speed gearbox. Your advantage: 20 Newton meters more (270 Nm) and fuel savings of twelve percent.

Would the MG Hector have a chance with us too?

The price list for the petrol models starts at 19,125 euros in the basic configuration and goes up to 24,225 euros for the Sharp version. The diesel starts at 20,400 euros and ends at 25,500 euros. It has not been communicated whether the GM Hector will ever come to Germany.

From the outside, the MG Hector looks martial and tall. It remains to be seen whether the Indian market has been waiting for an SUV from China-Britain and whether the MG will be a success.