A new era for manned US spaceflight begins

On Saturday, for the first time in around nine years, astronauts are scheduled to take off from the USA to the ISS space station. Everything about this Demo 2 mission, which SpaceX is carrying out in conjunction with the US space agency NASA, is symbolic.

What is particularly striking, however, is that those responsible draw all kinds of direct parallels between the new manned space flight and the earlier Apollo moon missions.

Demo-2 is the first manned mission from the Kennedy Space Center in Cape Canaveral, Florida since 2011. At that time, Atlantis, NASA's last space shuttle, flew to the International Space Station (ISS) under the mission code STS-135.

The two space shuttle veterans Douglas Hurley and Robert Behnken are on board the new SpaceX spaceship. Hurley was the lead robotics operator for the space shuttle mission STS-127 and for the final mission, STS-135. Behnken meanwhile flew with STS-123 and STS-130. So for both of them it is a return to their old place of work.

Christopher Cassidy, another US veteran who flew with Hurley in the space shuttle STS-127, is already on the ISS and will greet his colleagues there.

More on this: 50 years ago: The race into space leads to the moon 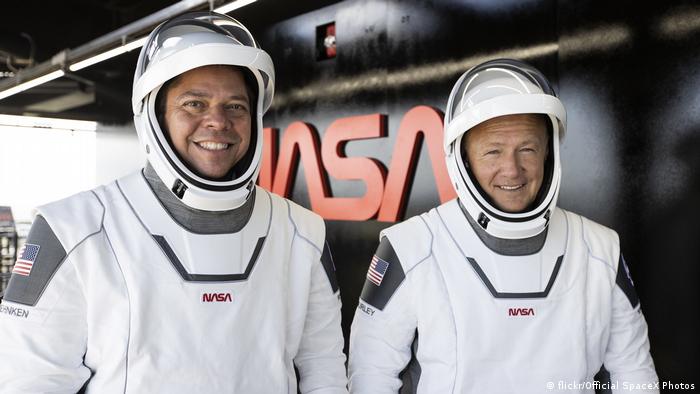 Back to the old place of work: astronaut veterans Robert Behnken (left) and Douglas Hurley (right)

The launch site, Launch Complex 39A, is also symbolic. It was originally built for the Apollo lunar missions, which flew from 1969 to 1972. After a renovation, it was also used for the later start of the space shuttle program. In 2014, SpaceX signed a 20-year lease to operate the site.

Is the beginning of a new commercial era?

The program sounds like a break with tradition, but it really isn't. The Apollo missions were also deeply rooted in the commercial industry. The lunar module Eagle of the Apollo 11 mission was built by the aircraft manufacturer Grumman, who mainly specialized in military aircraft. This collaboration with industry never really stopped.

More: Who is Elon Musk and what made him great?

Indeed, under President Donald Trump, the US administration has expressed a desire for more of NASA's work to be shifted to the commercial space and engineering sectors.

It is safe to speculate that such a move would allow government agencies to focus on another avowed American goal - the militarization of space. That would contradict the 1967 space treaty, but two years ago President Trump had already indicated that he could withdraw from this treaty as well. However, he is not alone with military intentions in space. France, China and India have similar intentions - primarily, it is said, they are supposed to protect the satellite infrastructure in space.

But NASA sees itself primarily as a scientific organization. Her ties to the commercial space industry are shaped by pragmatism. NASA focuses on early-stage science, handing mainstream development off to those companies like SpaceX or Boeing that, unlike American taxpayers, are willing to take on the financial risk.

To promote the development and demonstration of safe, reliable, and inexpensive crew transportation systems, NASA has placed more than $ 400 million in contracts with the private sector. Companies like Blue Origin from Amazon founder Jeff Bezos and the United Launch Alliance - a union of Boeing and Lockheed Martin - are working on it, to name a few.

More on this: Orion, Starliner, solar eclipses and planets: This is coming to us in space in 2020. 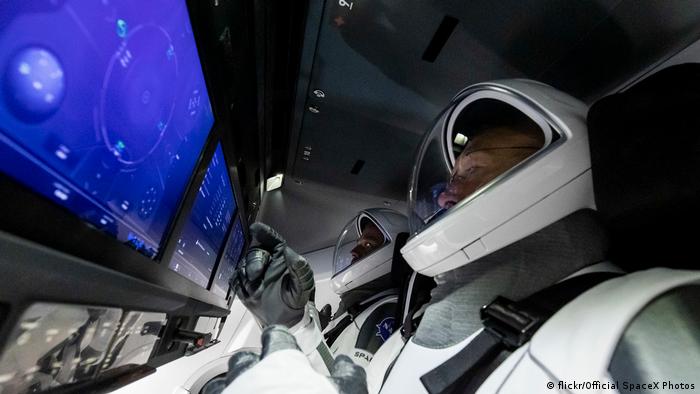 Other actors in this area

Even if SpaceX's Crew Dragon capsule is now bringing astronauts to the ISS, strictly speaking it is not yet approved for manned space travel. The first manned flight is considered a test flight - similar to the way commercial aircraft are put through their paces by test pilots before they are approved before they are allowed to start passenger operations.

Still, the Demo 2 mission will be a turning point for US space travel. It will have an impact on the Russian space program and international cooperation.

This ends Russia's de facto monopoly on manned space travel to the ISS, which has existed since 2011. Since then, the space agency Roskosmos has been flying Soyuz spacecraft from the Kazakh spaceport Baikonur to the ISS every six months.

And SpaceX isn't even the sole competitor. Boeing is developing the CST-100 Starliner together with NASA, so far unmanned. At the time of this writing, no new test has been scheduled.

And then there is the Orion space probe, a collaboration between NASA and the European Space Agency (ESA). 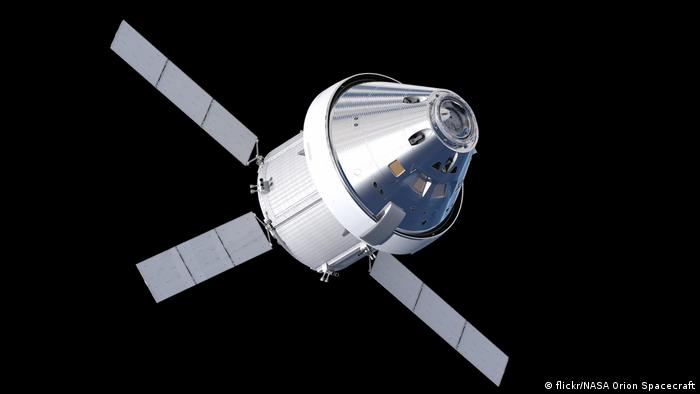 Nothing happens in space without cooperation: Orion is a joint US and European project

Orion is both a non-commercial and a commercial project, with service modules being built by contractors such as Airbus. In the US alone, at least 3,800 contractors are working on Orion and the rocket that will carry the space capsule, the Space Launch System (SLS).

All three capsules are reusable. They fly into space, return to earth, and are launched again. Reusability was a critical step in spaceship design as it makes an incredibly expensive endeavor a little more sustainable.

More on this: "There is a lot of space on the moon" 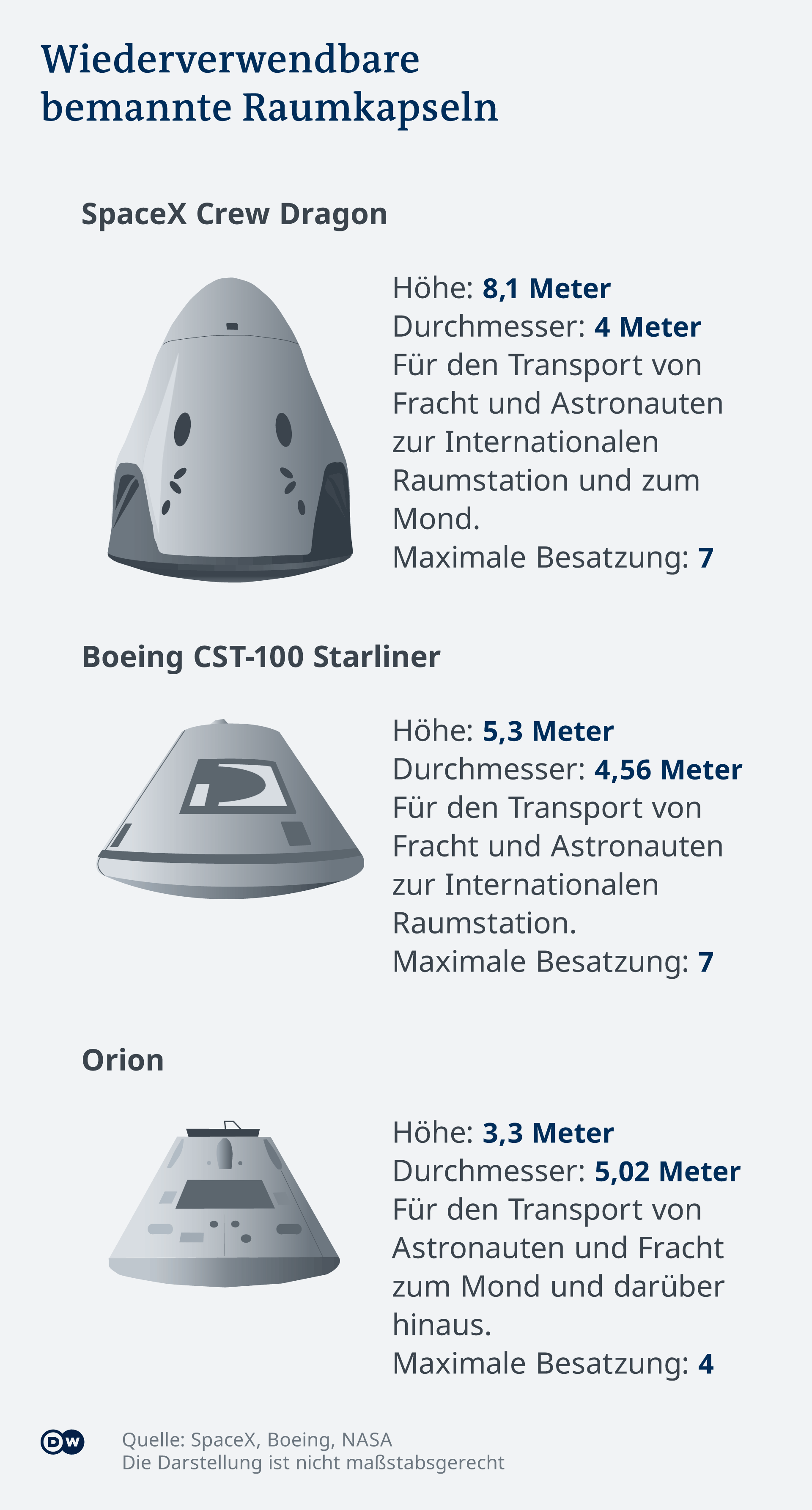 Currently, only SpaceX and Orion are aiming to make the jump off the ISS. SpaceX has targeted Mars while Orion is tied to the Artemis lunar program, which aims to send astronauts to the lunar surface by 2024. SpaceX plans to also participate in this mission with Crew Dragon.

This closes the circle of space exploration in a certain way: In Greek mythology, Artemis, a Greek goddess, was the twin of Apollo.

Crew Dragon, however, breaks with at least one tradition - the interior design of spacecraft, which so far has left something to be desired in terms of design. The new Crew Dragon capsule brings a complete upgrade to the interior. The spacesuits also look more elegant and modern. Everything looks like from the movie "2001: A Space Odyssey" by Stanley Kubrick, a chic SUV for astronauts.

Finally, there is one oversight that could be highlighted - a historical detail that seems to have escaped both Space X and NASA's attention to historical detail: the fact that on the last space shuttle mission in 2011, an astronaut, Sandy Magnus , was on board. This time there are only men in it.