How long is a dog's memory

Smart four-legged friends: The memory of dogs is more similar to that of humans than expected. Because the animals can remember past events well - even if they have only observed something. They thus have an episodic memory similar to ours, researchers report in the specialist magazine "Current Biology". The dog has cracked another supposedly human domain.

Dogs are not only man's proverbial best friend, they also have considerable intelligence - as any dog ​​owner would confirm. The clever four-legged friends understand our gestures, looks and words and can even count - albeit a little worse than wolves. The great ability of dogs to learn also demonstrates that dogs have a very good procedural memory: They can remember skills and processes that have been learned.

So far, however, it remains to be seen whether dogs also have an episodic memory. In contrast to trained skills, we use it to memorize events and experiences in our life - and this practically on the side, without consciously paying attention to them. "This form of memory is also considered to be closely linked to having a sense of self," explains Claudia Fugazza, head of the study from Eötvös University in Budapest.

So far, episodic memory has mostly been considered the domain of humans - also because you can't simply ask animals: “Do you still remember?” It is therefore debatable whether, for example, great apes have this form of memory. The difficulty lies in developing experiments and tests that query the episodic memory without conscious learning or training having taken place beforehand. 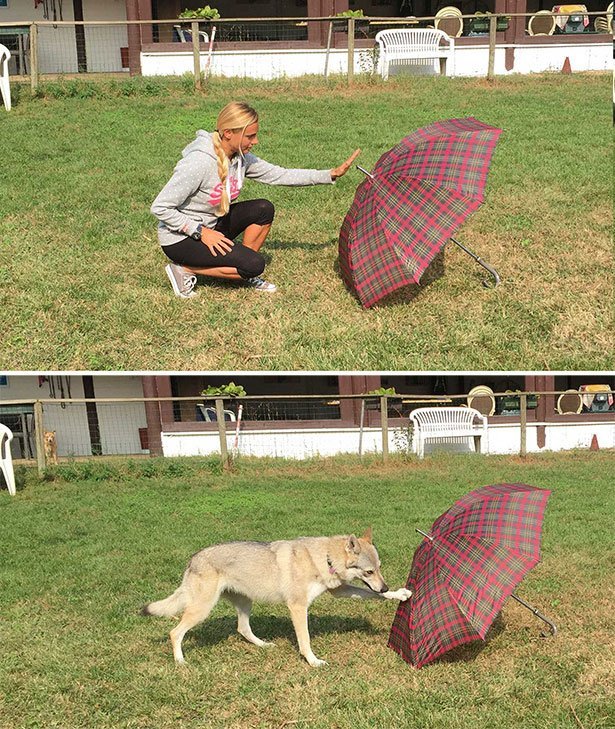 First mistress, then the dog: A typical example of the "Do it yourself" game. © Mirko Lui

To ensure this, Fugazza and her colleagues have repurposed a popular dog learning game. The dogs are trained to imitate the actions of "their" human when they are asked to do so by command. For example, if the mistress turns in a circle and then says “Do it!”, The dog turns too.

However, this is not yet an example of episodic memory. Because the dog imitates the action directly and is prepared to do so in the context of the educational game. But the researchers modified the game: After the “Do it yourself!” Training, a practice unit followed in which lying down was trained. The dogs "forgot" to consciously observe and memorize every movement of their owner.

Only after this distracting intermediate session did the dogs receive the order again: “Do it!”. The four-legged friends had to imitate an act of their owner, which they had seen before, but which they had not explicitly followed with the thought of an imitation. Did you still keep the whole action?

In fact: the dogs had memorized the action of "their" human being and were able to successfully imitate it. They managed to do that even if the “Do it!” Command came an hour after the action, as the researchers found out. Although the dogs were not consciously focused on copying while observing, they later remembered it.

"As far as we know, this is the first evidence that a non-human species remembers complex events without understanding them directly when they are memorized," state Fugazza and her colleagues. When imitating, the dogs have to fall back on a pure mental representation of what has been seen before and also remember an event that they had not consciously memorized beforehand.

Course of the experiment on dog memory © Cell Press

According to the researchers, this suggests that dogs have some form of episodic memory. “You can see these results as a further step towards tearing down the artificially constructed wall between non-human animals and humans,” says Fugazza. (Current Biology, 2016; doi: 10.1016 / j.cub.2016.09.057)