What is an Erling Stone 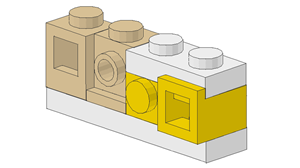 This component has a cult character - the names given by its fans testify to this:

If the lamp brick is installed rotated by 90 ° and a plate is placed on it, this construction is exactly as high as a normal LEGO brick or as three small plates.

In 1979, the first LEGO sets that contained lamp bricks appeared. Initially, they were really only used for headlights and taillights. But that should change soon ...

The absolute cult car of the 80s contained the insane amount of four lamp stones in elegant black.

Geometry of the lamp blocks (information in "LDraw units")

Geometry of the lamp stones

The geometry of the lamp stones is very interesting. They have two knobs, one on top and one on the side. But they also have two anti-knobs, i.e. holes in which knobs can be clamped. Of course, there is an anti-nub at the bottom, but there is also a square recess at the back into which exactly one nub fits.

The information in the figure shows the so-called "LDraw unit", ie the basic unit as it is used in the LDraw CAD system for LEGO.

The special characteristics of the lamp block actually do not fit into the overall geometry of the other LEGO elements. So there are always rumors that this element will no longer be produced in the future. But even the designers at LEGO want to prevent that of course ... 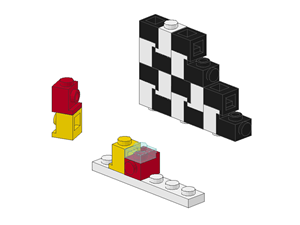 Everyone should be familiar with the headlights and taillights (~ lamp bricks) of LEGO cars from the 80s. This ingenious little component is indispensable when snotting. 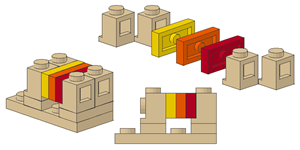 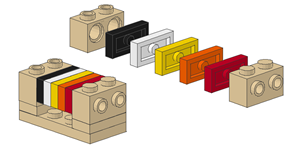 This construction uses technical stones or normal stones with additional knobs on the side instead of the lamp stones. The distance between the lamp stones is two knobs, the "notched" area consists of five 1x2 plates. 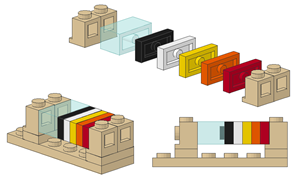 A very similar construction. Here the distance between the lamp stones is three knobs, the "notched" area consists of a 1x2 stone and five 1x2 tiles.