What causes dry throat in rabbits

Read in this article: 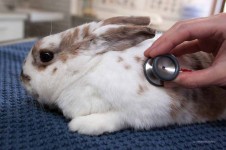 If a rabbit cold is suspected, the vet will listen to the rabbit's lungs. Photo: vetproduction

What is a rabbit cold?

Rabbit cold (rhinitis contagiosa cuniculi) is a relatively common infectious disease in rabbits. Similar to the human cold, rabbit cold is contagious. Affected rabbits secrete more secretions from their noses. They often show other symptoms such as sneezing, shortness of breath or even reddened eyes. Various germs can cause rabbit cold, most of which are bacteria.

What are the causes of a rabbit cold?

The causes of rabbit cold are infections of the rabbit with certain pathogens. Different types of bacteria (e.g. Pasteurella, Bordetella, staphylococci) or so-called mycoplasmas are typical triggers of rabbit cold. Infected rabbits transmit the pathogen through direct contact or spray mist - by sneezing - to other animals. There, the germs mainly attack the respiratory tract and trigger purulent inflammation. Colds, sneezes and other symptoms of rabbit cold are the result of the infection.

The following factors are possible causes of rabbit cold or promote infection:

How is rabbit cold expressed?

Rabbit cold shows up in rabbits through typical symptoms. In sick animals, the nose secretes more secretions. The runny nose can be transparent liquid to purulent and often sticks the fur to the nostril. Since the rabbit cleans itself more often than usual, the paws are also stuck together with secretion. When rabbits have a cold, the eyes are often reddened or inflamed with pus. Often the pet owner hears unfamiliar breathing noises in his rabbit due to the difficult nasal breathing or he notices that it is breathing through its mouth.

Now read on in this article: