Why are most Afghans illiterate? 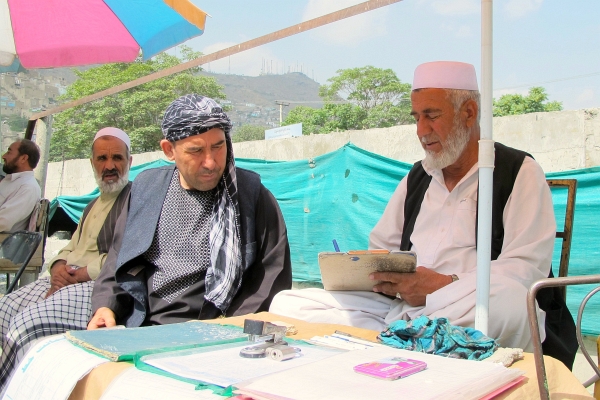 Kabul, October 1 (IPS) - Mohamad Arif is 70 years old and earns a living on the streets of the Afghan capital Kabul. He writes all kinds of documents for people who cannot read and write. He has to do with that, because most of the 30.5 million Afghans are illiterate.

"I was a colonel in the Afghan Air Force. But I can hardly make a living from my pension, so I have to keep working," he says. The ex-military has been offering his services as a clerk for ten years. He only takes a break on Friday, the holy day for Muslims. Otherwise, he and other colleagues sit under a parasol in front of the provincial government building and serve their customers.

"People ask me to write letters to relatives, often to someone in prison," he says. "Most of them, however, need help filling out official applications." His last customer trying to claim an outstanding family inheritance earned him the equivalent of 80 US cents.

More than 80 percent of women cannot read or write

According to data from the Afghan Ministry of Education, around 66 percent of Afghans are incapable of reading and writing. For women, the proportion is up to 82 percent.

Arif's regular customers include 32-year-old Karim Gul, who has sold a car and is still waiting for his money. "My parents moved from Badakhshan in the northeast of the country to Kabul when I was a child," says the Tajik. "They didn't let me go to school because they feared that the other children would have laughed at me." He now feels too old to learn to read and write.

Like the others, Gul only has to wait a few minutes for his turn. The 15 clerks sitting in front of the government building are all experts in their field. Gulam Haydar, who has been writing for other letters for decades, is probably the most experienced. "I was a civil servant until I retired eight years ago. I have to keep working to survive," explains Haydar. Depending on the job, it costs between the equivalent of 30 cents and $ 1.7. With that he can top up his meager pension of $ 203 a month.

Corruption is deeply rooted in the state apparatus

Shahab Shams, who sits next to him, not only has to finance his own living, but also his two children's schooling. The 42-year-old has been working as a scribe on the street for 13 years. "There is no work for anyone in Afghanistan. And corruption is rampant. You have to pay bribes to get official documents such as a passport, to enroll your children in school or to be treated in hospital. In every single government agency that is common." With his engineering degree from the University of Kabul, Shams was never able to do anything. 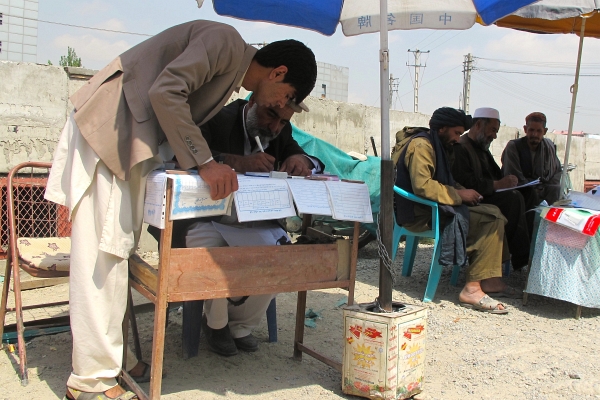 In Afghanistan, writers can earn up to one dollar with one letter
Image: © Karlos Zurutuza / IPS

According to a joint investigation by the Afghan anti-corruption agency HOOAC and the United Nations Office on Drugs and Crime (UNODC), around half of Afghans paid bribes to receive public services in 2012. The study, published in the same year, concluded that most Afghans consider corruption, along with insecurity and unemployment, to be one of the biggest problems in the country - ahead of poverty, domestic interference and governance.

On the other hand, such studies also show that corruption is increasingly being tolerated in everyday life in Afghanistan. Around 68 percent of the people surveyed in 2012 were of the opinion that it was justifiable for a civil servant to supplement his low salary with small bribes. In 2009 only 42 percent of Afghans thought this way.

In 2012, around 67 percent of the population considered it "sometimes acceptable" for a civil servant to come to his job through family and friendship relationships, compared to 42 percent in 2009.

Leyla Mohamad never had a chance to enter the civil service career. It is true that women in Afghanistan now also have access to the public service. But being able to read and write is a prerequisite for this. The woman, wrapped in a burqa, seeks help from a clerk because she was attacked in broad daylight on the street in the company of her three children.

"We hear about such incidents every day," says Abdurrahman Sherzai after filling out a form for his client. "Too much time has been lost in the failed electoral process. The economy is stagnating because too many companies are dependent on government subsidies. It is possible that sheer desperation leads to attacks on those members of society who are least protected."

After the presidential election on April 5 and the runoff between the candidates Abdullah and Ashraf Ghani on June 14, all votes had to be re-counted due to allegations of fraud. After the opposing parties had agreed on a unity government on September 21, Ghani was appointed the country's new head of state. The results of the counts are not published.

According to the Afghan Minister of Education, Ghulam Farooq Wardak, such a situation would be inconceivable in a literate country. "But I also remember that twelve years ago we had to start from scratch again. At that time, 95 percent of the population could not read or write."

According to Wardak, current data give cause for optimism. "Twelve years ago only about a million children went to school, now there are almost 13 million. The number of teachers has increased tenfold from 20,000 to more than 200,000." As the minister announced, in 2015 all school-age children will start school. And for 2020 he expects full literacy. (End / IPS / ck / 2014)