The Scriptures of the World: The Georgian Script 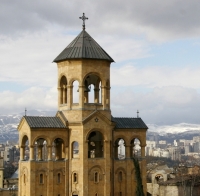 In addition to Georgian, Swan, Sanisch, Lasisch and Mingrelian belong to the South Caucasian language family. A verifiable relationship to other languages ​​has not yet been found, neither to Indo-European, nor to Semitic or Altay.

With more than four million speakers, Georgian is the largest single language in the group of South Caucasian languages. As the official language in Georgia, it is also the only language in this group to have official status.

Outside Georgia you can find speakers of Georgian in Turkey, Azerbaijan, Armenia, Iran, Russia and Ukraine.
In addition to Georgian, Azerbaijani, Armenian, Russian, Abkhazian and Ossetian are spoken in Georgia.

Georgian has a long tradition as a literary and cultural language. Georgian language literature can be traced back 1,500 years.
According to tradition, it is even older than Christianity.

The first literary finds in Georgian date from the 3rd century BC. So the Georgians already had a script before their own Georgian alphabet emerged.

The Georgian alphabet probably developed at the beginning of the 5th century. Some researchers are of the opinion that this happened under the influence of the Greek out of the Aramaic alphabet. However, this view is controversial.

In any case, the fact is that the Georgian alphabet has the same sequence of letters as the Greek alphabet. This makes the Georgian script one of the oldest Eastern European scripts.

In the history of the origins of the font, a distinction is made between three chronologically consecutive fonts, the Mrgwlowani-Script (Asomtawruli) from the 5th century.

From this emerged in the 9th century KutchovaniScript (Nusxa-xucuri, Nusxuri) and finally in the 11th century the Mchedruli- Font that is used up to the present day with some changes.

The original 38 letters of the Georgian alphabet became today's 33. These are divided into 28 consonants and 5 vowels.
Since there is a letter for every phoneme, i.e. for every sound, the alphabet accurately reproduces the pronunciation of Georgian.

The font is read from left to right and does not differentiate between upper and lower case.

The following table gives you an overview of the characters in Georgian:

Or would you like to practice writing Georgian script yourself?
Then our exercise template for Georgian characters is right for you. You can print out the sheet of paper and find space to write down the characters there.

If you would like to find out more about the language, culture, country and people of Georgia, take a look at the websites http://www.sakartwelo.de and http://geokulturforum.de.

Maybe we could arouse your interest - if you haven't already - in the Georgian script?
In any case, we hope you enjoy learning!

Your editorial staff of Sprachenlernen24