Active high and low passes are also possible with multiple negative feedback inverting OPV circuits. The following circuit shows a 2nd order low-pass filter and the transfer function. I have deliberately avoided the extensive mathematical considerations. The specified condition must be observed for correct dimensioning. In most cases, the values ​​of the capacitors are specified because their tolerance range is more limited than that of the resistors. 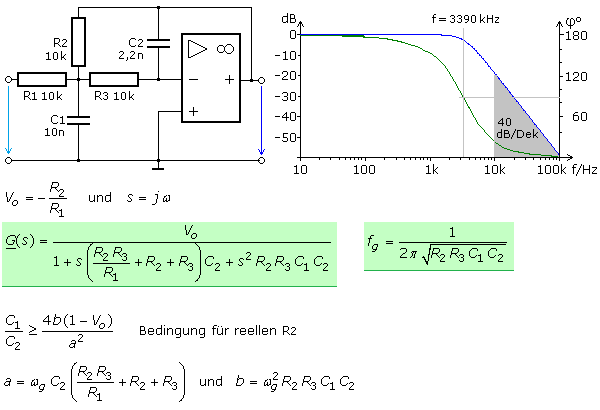 If capacitors are used instead of the resistors and resistors are used for the capacitors, a 2nd order high-pass filter is obtained. The general mathematical derivation is almost always very extensive. Normally, the capacitors are specified for dimensioning and the resistance values ​​are calculated. In many cases, certain simplifications are made by using the same resistor and capacitor values. There are parameter lists for basic filter elements and certain filter characteristics that can be found in the literature and on the Internet. 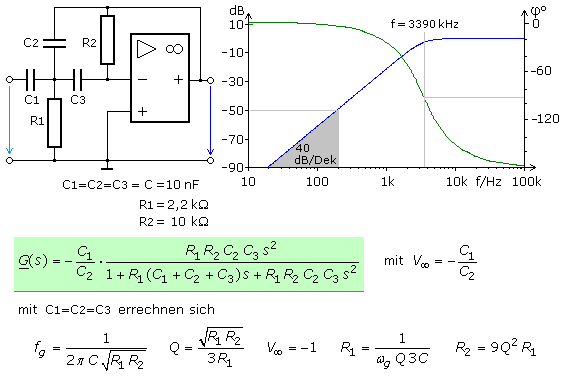 The basic mode of operation can be determined through boundary considerations. For low-frequency input signals, the reactances of both capacitors are very high and the gain of the OPV increases proportionally with the input frequency. The capacitor C1 has a very low resistance for high-frequency input signals. This frequency range is amplified and inverted by the OPV and returned to the input node via C2, which is also low-resistance. The addition of the signals forms the effective input signal for the OPV with a weakened amplitude. In practice, the bandpass is built with the same capacitors. 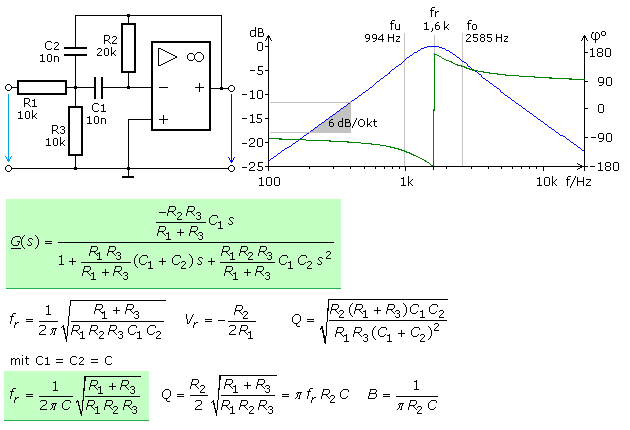 The gain Vr at the center frequency, like the bandwidth B, is independent of the resistor R3. Without influencing these parameters, the center frequency can consequently be determined with R3. The circuit also works as a bandpass without R3, but with fewer degrees of freedom.