Influence of the tertiary structure through changes in the pH value

Trypsin is an enzyme found in the small intestine that works best at a pH between 7 and 8, i.e. in the slightly alkaline range. At a pH value of 3 to 4, trypsin no longer works optimally, as does a pH value of 10 or 11 that is too alkaline. One can therefore say that trypsin has a pH optimum in the range 7-8.

Pepsin, on the other hand, is an enzyme in the stomach that has its optimum pH in the range between 1.5 and 3, i.e. in the already strongly acidic range. The enzyme ceases to function at a pH value of 6 or higher.

Both enzymes are therefore pH-dependent in their activity. How can one explain this phenomenon?

Enzymes are nothing more than proteins with catalytic capabilities, i.e. proteins that accelerate certain metabolic reactions. An enzyme has a specific region called the active center. According to the key-lock principle, a certain substance that is to be changed by the enzyme settles in this active center. Trypsin and pepsin, for example, break down proteins, i.e. break down proteins into smaller peptides. Those substances that fit into the active center of an enzyme according to the key and lock principle and are then also changed by the enzyme are generally referred to as substrates.

If the active center changes structurally for whatever reason, then the lock no longer fits the key and the enzyme can no longer work as well or even stops working. 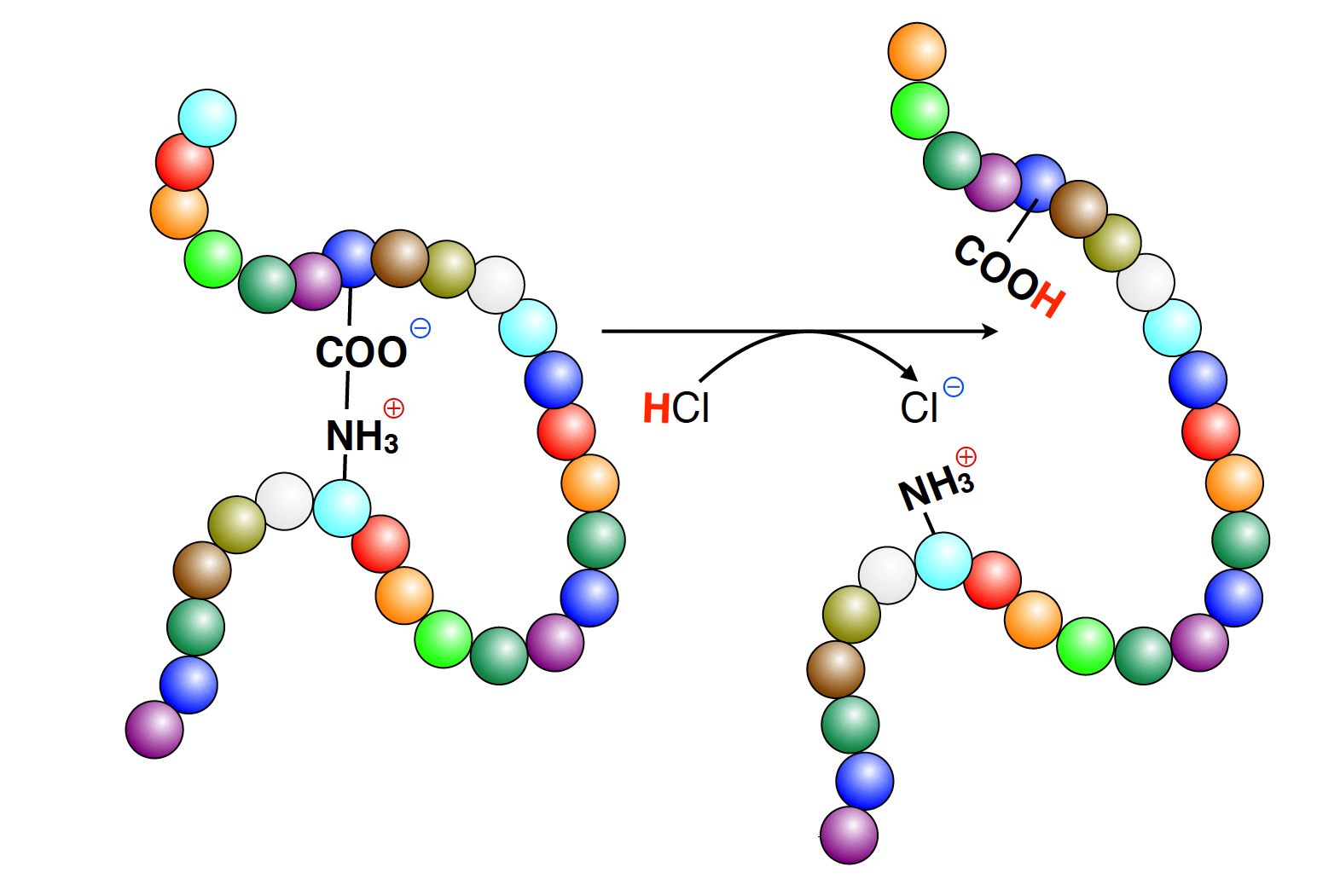 Modification of the tertiary structure by adding an acid

The picture above is of course only a model; real enzymes have a much more complex structure than the peptide in the figure. On the left we see the "enzyme" in its working version. A substrate is located in the active center and is about to be changed. The tertiary structure of the peptide is held together by an ionic bond.

Now we add an acid to the medium in which the enzyme is located. Adding an acid always means: increasing the proton concentration (because acids are proton donors, i.e. they give off protons to the solvent or to other substances in the solvent).

The negatively charged carboxyl group, on the other hand, is negative because it has given up a proton. If we now increase the proton concentration by adding an acid, a proton will immediately attach itself to the carboxyl group, which then becomes the neutral COOH group again.

Now the positive charge of the amino group lacks the negatively charged partner. The ionic bond dissolves and the protein changes its tertiary structure, as you can see quite well in the picture (I have exaggerated a lot here to make things clear to you, of course).

The substrate no longer fits into the active center, and therefore the enzyme can no longer convert the substrate. The enzyme activity drops sharply or even drops to zero.

Addition of a base

When we add a base to our enzyme, basically the same thing happens as when we add an acid. Here, too, the tertiary structure of the enzyme changes and the enzyme can no longer work correctly.

When we add a base, we add a proton acceptor (because this is how the term base is defined: bases are proton acceptors). This means that the molecules of the base absorb protons from the medium, which means that the concentration of the protons in the medium drops. This in turn affects the pH value, which increases as the proton concentration decreases.

The negatively charged carboxyl groups are not affected. You have already given in a proton and that is the end of it.

Influence of the tertiary structure through changes in temperature

However, the tertiary structure of an enzyme does not change when the temperature is lowered; the reduced enzyme activity is solely due to the RGT rule.

If you increase the temperature, the RGT rule also applies first. The enzyme activity increases. But that only works up to a certain point. At some point it is so warm that the enzyme becomes unstable. The atoms in the enzyme begin to vibrate more and more, and at some point the bonds within the protein break. First the weak chemical bonds like hydrophobic interactions, van der Waals bonds and so on. At higher temperatures, the hydrogen bonds also become unstable. However, all of these changes are reversible. This means that when the temperature drops, these bonds completely recede.

On the other hand, the cleavage of the disulfide bridges, which can exist between two cysteine ​​residues, are not reversible. If the temperature is increased too much, these disulfide bridges break and this cleavage is as good as irreversible (reversible). The tertiary structure of the enzyme changes permanently. It is also said that the protein denatures.

Denaturation of this kind is an everyday occurrence that can be easily observed when a hen's egg is thrown into the pan. The clear protein immediately becomes cloudy and firm. This is mainly due to changed disulfide bridges in the proteins of the chicken egg.

Changes in the tertiary structure due to a reducing agent

Disulfide bridges can also be opened by certain chemical substances, as the picture above shows. Reducing agents "set" H atoms on the S-S bridges again, so that -SH HS groups are formed again, between which there is no longer any bond.

This is an everyday occurrence at the hairdresser's. The disulfide bridges of the hair are dissolved with a reducing agent, then the hair is reshaped, and then new disulfide bridges are created with an oxidizing agent, which then keep the shaped hair stable for weeks to months ("permanent wave").