A short step - clack - walk in and off you go. But how does the gear wheel get into position in a fraction of a second? And how is it guaranteed that in a rush, two gears do not engage at the same time, which would mean a disaster for the transmission and driver. In addition, the question arises as to how the variable gear wheels survive the brutally hammering engine power in connection with sloppily kicked-in gear changes?

0.10 seconds for the pure switching process

In order to understand what goes on in a conventional motorcycle claw transmission, we rewind the gearshift process in slow motion and observe how the rotary movement on the gearshift lever develops into an axial displacement of the gears. The first gear is turned out, the maximum torque ensures rapid acceleration. Shortly before the red zone, i.e. the maximum engine speed, the driver takes off the gas, pulls the clutch and shifts into second gear. He moves the gear lever up around 30 millimeters - or down in the case of a racetrack configuration. Tough pilots need around 0.15 seconds for the clutch to re-engage, the interruption of tractive power is over and the throttle valves are at full throttle.

For the actual shifting process, on the other hand, only about 0.10 seconds pass, in which the first gear is moved out of its position and then the second gear wheel is axially shifted about six millimeters on the transmission shaft so that the shift claws engage securely.

Conversion of the rotary movement on the gear lever

Some mechanical steps are necessary to convert the rotary movement on the gearshift lever into a linear displacement. First of all, the rotary movement of the selector shaft must be transmitted to the selector drum. There are different possibilities for this in the form of teeth, a lever transmission or a pawl mechanism. All systems are equipped with a ratchet mechanism that allows the selector shaft to turn the selector drum through certain degrees and then return to its original position. Only the grooves milled into the shift drum transform the rotation into a linear movement and transport the so-called sliding wheels through the link on the shift drum into their position.

Due to the lightning-fast processes of the mechanical process, friction and inertia forces arise. Neither of these can be used at all with sports and racing machines, because there an unnecessarily long interruption of tractive power on the rear wheel causes suspension unrest and loss of time. In high-quality sports engines, the gearshift shaft and gearshift drum rotate in needle or ball bearings in order to reduce friction as much as possible. In professionally built racing machines, needle-bearing gear levers and backlash-free, smooth-running quality ball heads or even needle-bearing gearshift rods reduce friction and play in the gearshift construction to a minimum.

The inertia in the gearbox can be tackled with lightweight components. The steel shift drums are mostly hollow cast and / or largely milled off. Shift drums made from a high-strength aluminum alloy are even more efficient. These allow the roller to rotate at lightning speed, which is supported by the so-called star switch. This has the task of locking the shift drum absolutely reliably through the cam profile and a spring-loaded roller. Pointed cam shapes also ensure that the spring force accelerates the shift drum when the gear wheel is engaged, thus shortening the shifting process. 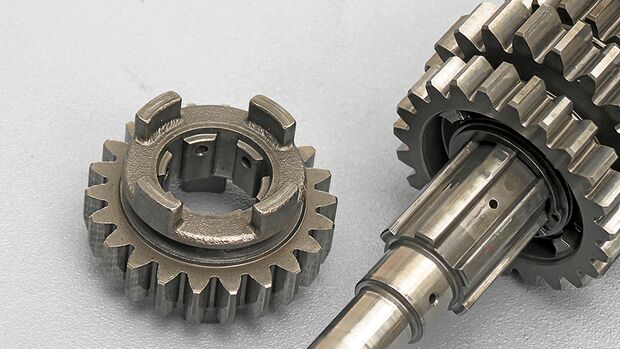 cook
Sliding wheels are connected to the gear shaft (right) via internal gearing (left) and can be moved axially.

The gearbox itself consists of the so-called input shaft, on the end of which the clutch sits and introduces the force, and the output shaft, the end of which protrudes from the motor housing and accommodates the chain pinion. A pair of gears is available for each gear step. Since these are constantly in mesh, these pairings must each consist of a fixed gear and an idler gear. Loose gears are not permanently connected to the shaft, but rotate freely on needle or plain bearing bushes on the respective gear shaft. The fixed gears are rigid, non-displaceable gears that are milled or pressed onto the shaft. The frictional connection to the shaft is created by the sliding gears, which can be shifted laterally on a toothing and which engage with the claws in the recesses of the idler gears.

This also gives the idler gears a form-fitting connection in the drive train. The problem with the double sliding wheels is their high weight, which releases enormous inertia forces when shifting quickly, which is why the shift forks must have a high level of flexural rigidity.

The gear ratios of the respective gear steps depend on the intended use and the engine characteristics. Sports and racing transmissions are designed in such a way that all gears can be used on the racetrack in order to keep the speed jumps when shifting as low as possible. So the first gear is geared relatively long, the remaining levels are designed increasingly narrow. This guarantees that you can stay in the most favorable torque and power range at high speed and correspondingly high driving resistance (air resistance plus rolling resistance). Touring machines, on the other hand, are increasingly being equipped with a noticeably long sixth gear, which significantly reduces the speed and thus saves material and fuel.

The tooth shapes of the gear wheels are decisive for the quietest possible running of the gearbox. The combination of pressure angle, profile shift, module and countless other factors is more likely to be traded as a trade secret. Gear wheels with helical teeth undoubtedly have the smoothest running. Such transmissions, however, require a completely different type of gearshift, with the power flow not being produced via sliding gears but via so-called shift sleeves. The advantage of gearshift sleeves: Due to their low weight, they can be moved extremely quickly and easily, which is why such transmissions are particularly difficult in racing. The disadvantage: The gear shafts are a little longer than with claw gears, in which the entire gear wheels are shifted. 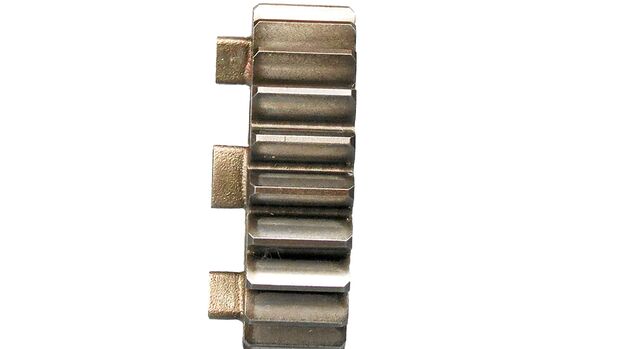 The shiftability of a transmission depends on many factors. In addition to the mechanical friction already mentioned, the shift curve on the shift drum and the arrangement and free rotation angle as well as the number of claws play a major role. After all, they have to change their position at full gear speed - around a third of the engine speed. In order to guarantee that the gear wheels remain firmly in their position, the claws of high-performance machines are provided with a relief grinding of around four degrees. This relief ensures that gear wheels connected to one another literally “tighten” under load.

In purely mathematical terms, a resistance-free shifting process is only possible with approximately every second gear change. Namely when the claws are exactly aligned with the recesses on the adjacent gear wheel. If this is not the case, the shift fork pushes the gear wheel into what is known as the “claw-on-claw” position, which delays the shifting process until the gear wheels have rotated so far that the claws can slip into one another. The greater the free angle of rotation, ie the "play" from claw stop to claw stop, the greater the chance of a clean shifting process. With the disadvantage that this play has a negative effect on the load change behavior. That is why the designers usually look for the best compromise between easy shiftability and direct, low-jolt power transmission.

The greater the gear spread, the harder the shifting process

As a rule, the larger the gear spread, the harder the shifting process. The reason: The large speed difference between the engaging gears prevents a more or less synchronous run, the claws rattle correspondingly hard into the recesses. The situation is similar with many machines when engaging first gear, which often arouses the attention of passers-by with a loud, hard gear shift. Most of the time, the main cause of this mishap is a clutch that has stuck to the engine oil.

The engine flywheel mass, the drag torque between the crankshaft and the rear wheel - keyword sticky clutch - and the shock absorbers in the drive train also influence the shifting process depending on the speed. Rapid upward gear changes are also possible without using the clutch; after all, a brief release of the load on the drive train is enough to shift the gear wheels. However, such a switching process does not always succeed, which means that the claws engage hard and with a loud switching impact. On the other hand, good electronic switching devices regulate this process almost perfectly. However, it is not enough to simply turn off the ignition for a few milliseconds. Only when the engine speed and shift position are taken into account can clever electronics, for example triggering an intermediate spark, not only shorten the shift process to around 2/100 seconds, but also protect the transmission and stabilize the chassis when accelerating. How the engine power is transmitted to the rear wheel via the chain and cardan and how the torque affects the swing arm, suspension and cornering behavior, is in PS 12/2013. 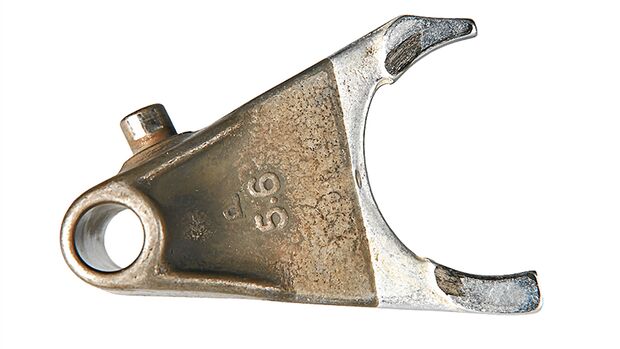 Bilski
Gearbox damage: The hard chrome-plated contact surfaces of the shift fork show slight scuff marks due to the lateral forces of the gears.

Surface chipping, known as pitting, is one of the most common gear damage. The causes are mostly too small dimensions, wrong hardening process or unfavorable tooth shapes. In continuous operation, such gears are destroyed by the high surface pressure. 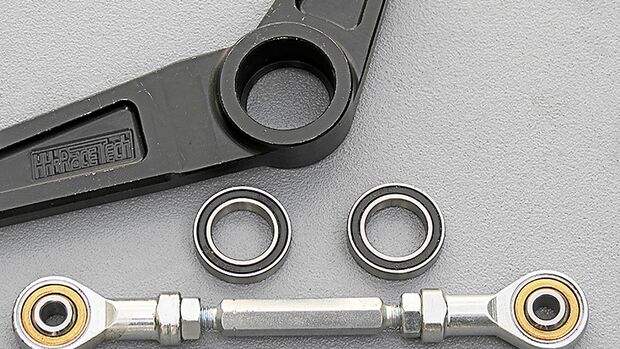 In order to optimize a series connection, you should first check whether the shift linkage is at a 90-degree angle to the shift lever. This is the only way to ensure the leverage of the kinematics specified during construction.

The often cheap ball joint heads can be replaced by high-quality and smooth-running components (e.g. Askubal, Durbal, SKF). To do this, the standard bolts may have to be drilled out of the shift levers.

Shift levers with smooth-running and play-free ball bearings (HH-Racetech) improve shifting feel and ease of movement. Shift levers positioned far outside the footrest axis also interfere with smooth gear changes, as the planes of rotation are too far apart and the boot has to slide over the shift knob to compensate for the length.